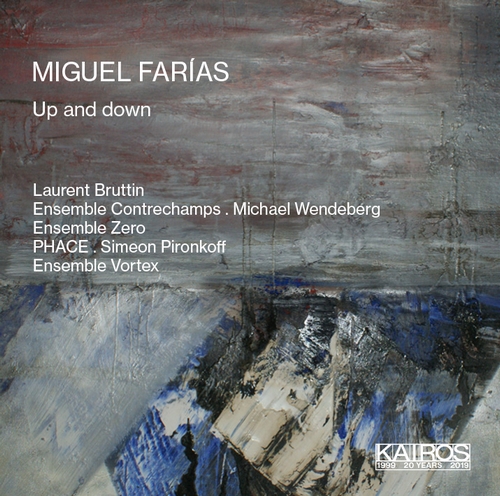 Farias: Up and down

Kairos - 0015011KAI
Kompozytor
Miguel Farias (ur. 1983)
Wykonawcy
Laurent Bruttin, clarinet
Ensemble Vortex
Ensemble Zero
Ensemble Contrechamps / Michael Wendeberg
PHACE / Simeon Pironkoff
Up & down - Lecturas Críticas
Estelas
CBR
Palettes
Une voix liquide
Miguel Farías (1983) is one of the most promising young composers of South America. Having studied in France and in Switzerland, he is as well versed in Latin American popular music as he is in contemporary music in the Western tradition and often includes subtle allusions to his background and listening habits, as well as his “locus”, the region of the world from where he is writing from. The fact that already now top European performers such as Ensemble Contrechamps or PHACE play his music is a clear sign that Miguel Farías is a composer to watch.
Recordings: Salle Alhambra, Geneve/Switzerland, 13 December 2016 (Tr. 1); Studio Ansermet, Geneve/Switzerland, 19 May 2010 (Tr. 2); Fonderie Kugler, Geneve/Switzerland, 01 December 2018 (Tr. 5); Berio Saal, Konzerthaus Wien, Vienna/Austria, 26.01.2016 (4)