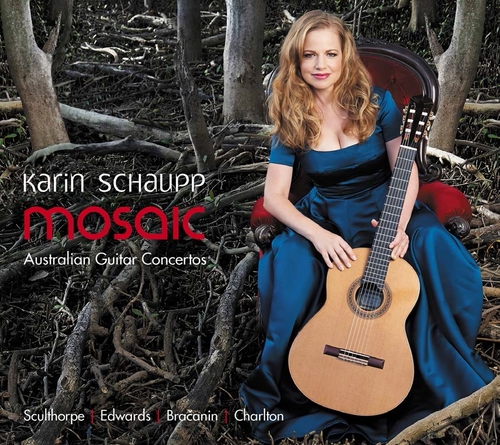 The four works on this CD span a period of composition of just 6 years (1989 – 1995) and for Ross Edwards, Philip Bračanin and Peter Sculthorpe, represents their major work for the instrument. Sculthorpe’s Nourlangie (previously released on ABC4767627) has gone on to become one of his most performed works and brings to life the expansiveness of the Australian continent. The Bračanin concerto, commissioned by Karin 21 years ago, has become the most frequently played guitar concertos on Australian radio. Ross Edwards concerto draws on the rich flora and fauna of Arnhem Land and the magnificent Arafura Sea beyond. In this premiere recording by Karin Schaupp (first released in 2005 on ABC4762270) Karin revels in the ‘Edwards’ sound world. The most recent work on this recording is from Richard Charlton, himself a guitarist, who wrote Mosaic for Adrian Walter for the final concert of the 1995 Darwin International Guitar Festival. Mosaic, is a musical expression of Charlton’s memories and impressions of the Northern Territory, from the brilliant colours of earth and sky to the exhilarating power of a tropical storm.

Karin Schaupp is one of the most outstanding guitarists on the international scene, acclaimed not only for her breathtaking technical mastery, but also for the passion and intensity of her playing inspiring several composers to write works especially for her. Karin Schaupp performs widely as a recitalist, concerto soloist and festival guest, and has given countless recitals in Australia, Europe, Asia, the US, Mexico and Canada. While still a teenager, she won prizes at international competitions in Lagonegro, Italy and Madrid, Spain, where she was also awarded the prize for the Best Interpretation of Spanish Music.

Karin has appeared in over 150 performances of Lotte’s Gift, a play written especially for her by Australian playwright David Williamson. The play enjoyed a four-week season at the Edinburgh Festival in 2009. Other recent performance highlights include concertos with the London Philharmonic Orchestra and the Springfield Symphony Orchestra in Massachusetts.

Karin’s discography on ABC Classics includes Lotte’s Gift (ABC476 5917) Songs without Words (ABC 476 5249) with recorder virtuoso Genevieve Lacey; and Spain: The Great Guitar Concertos (ABC476 3627) featuring works by Bacarisse and Castelnuovo-Tedesco as well as the Rodrigo’s Concierto de Aranjuez for which the GRAMOPHONE reviewer William Yeoman observed in May 2010: “I have never doubted her ability to make the guitar sing... By combining the lapidary precision of Williams with the expressiveness of Bream, Schaupp here brings us an Aranjuez fit to stand alongside the best of them.”