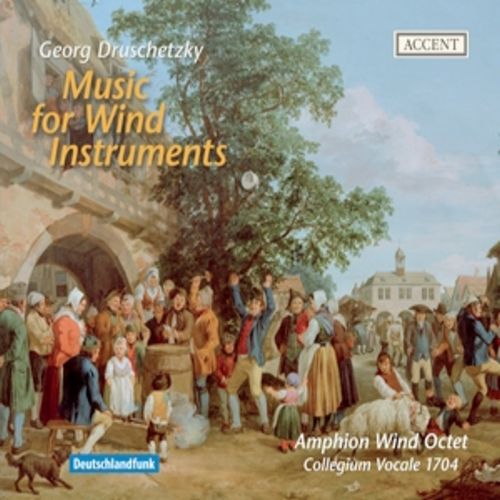 Works for wind band:
Parthia in C major, A minor & E flat major – Motetto
Works for wind band & choir:
Offertorium Veritas mea
Frühling
Sehnsucht
Punschlied
Georg Druschetzky (1745-1819) was a composer of Czech origin active in Austria for twenty-five years, then in Hungary for more than thirty years. In 1800, Druschetzky joined the harmonie ensemble of Archduke Joseph von Habsburg, Palatine of Hungary, resident in Buda, where he worked as court composer and, from 1813, as musical director until his death. While the Viennese harmonie musicians like Johann Wendt and Josef Triebensee produced masses of arrangements of operas, ballets and marches, Druschetzky limited himself to just a few, mostly serious arrangements of Haydn oratorios or of chamber music by Beethoven. To be exact, he composed a remarkable quantity of original compositions for wind band. The Parthia in C major could be included in the category “Partita in Campagnia” (open-air partita), with its virtuosity and cheerfully popular character, as could his Parthia in E flat major, with its bright and stormy final rondo. Druschetzky took a completely different tone of voice, based on the previous Sturm und Drang, in his Parthia in A minor. The use of a flute, which skilfully underlines the character of the piece by associating its sound with “wind” and “storm”, is remarkable. Several lyrical compositions by Druschetzky for choir and harmonie (i.e. Schiller’s ‘Punschlied’ or ‘Sehnsucht’) show the diversity which the wind bands were able to contribute to the entertainment of the court, apart from the original partitas or arrangements of known works.