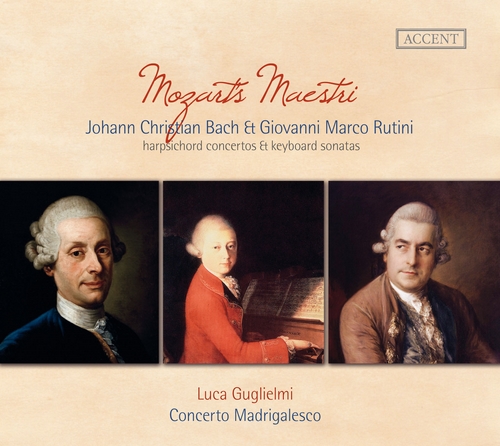 Giovanni Marco Rutini:
Sonata in D major Op.6 no.2 (+)
Sonata in E flat major Op.6 no.6 (§)
Sonata in f minor Op.5 no.5 (§)
It was only on very rare occasions that the Mozarts, father and son, had praise to spare for their composing colleagues. Amongst the few about whom they spoke favourably were Johann Christian Bach (1735-1782) and the Italian Giovanni Marco Rutini (1723-1797). On this CD, the harpsichordist Luca Guglielmi and his ensemble Concerto Madrigalesco present works of both of these composers which bear eloquent witness to this appraisal.

Mozart expressed his admiration for Johann Christian Bach, whom he had met in London when still a child, in a letter of 1778 in which he wrote that he loved him "with all my heart and I have high esteem for him". Together with his father, Mozart adapted Bach's Sonatas Op. 5, Nos. 2-4 as concerti with accompanying strings, interpreted by Luca Guglielmi on a replica of a Silbermann fortepiano. They are notable for their graceful, cantabile style, felt by the young Mozart to be particularly worthy of imitation.

Leopold Mozart was unusually generous in his praise of the then quite well-known Sonatas, Op. 5 of Rutini. Typical of these works is the varied treatment of textures and harmonies, as is the skilled use of contrasts – these, too, were elements that the young Mozart made his own. Guglielmi uses three different replicas of historical harpsichords for his recording of these sonatas.