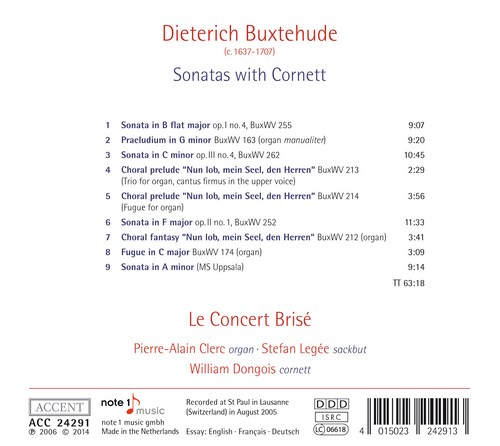 William Dongois is one of the best known cornett players of our time. He is able to perform the repertoire of his instrument – the cornett resembles a flute in its construction, whereas its wooden mouthpiece is used similarly to that of the trumpet – with dancelike elegance, rhetorical conciseness and, often, even with a certain "groove". In the late 16th century, the cornett developed into a highly virtuosic solo instrument, but the gradual decline of the cornett began with the rise of the violin beginning in about 1630.

On the present CD, William Dongois has concentrated on works of Dieterich Buxtehude that were actually intended for the "competing instrument", the violin. Together with Stefan Legée (baroque trombone) and Pierre-Alain Clerc (organ), he has adapted trio sonatas by Dieterich Buxtehude (originally for violin, gamba and continuo) for two winds with concertante organ – a type of arrangement that cannot be historically verified, but is all the more convincing in its sound. These sonatas are supplemented by several original organ works composed by Buxtehude. This composer's oeuvre has only survived to the present day thanks to several manuscripts; with just a few exceptions, astonishingly, it was not published during his lifetime.