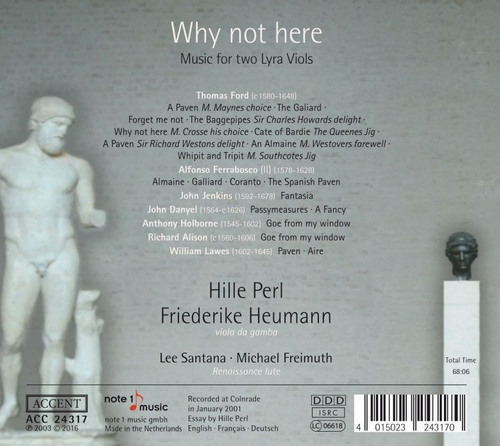 Around 1600 the composers of English music for viols followed a specific style direction known as lyra viol music. From the time between 1601 and 1692, 18 printed sources as well as more than 50 manuscripts sources have survived to the present day. The “lyra viol” is not primarily a different instrument, to be distinguished from a normal viol, but the term rather refers to a style of playing: the art of playing “lyraway” as the title pages of many of the sources indicate. The main characteristics of this kind of playing are the use of the chordal playing, implied polyphony with a changing number of voices, the use of plucked strings as well as bowed sounds and the use of a multitude of different tuning systems (scordatura): in the sources we find almost 60 different ways of tuning the viol. A small bass viol or a large tenor would be generally used for this kind of playing. It became the solo bowed instrument par excellence during the course of the 17th century.

Friedricke Heumann and Hille Perl began playing as a duo during the solar eclipse of the year 1999 in Paris. Their main objective is to discover lots of incredible Music for two viols that was composed either in Paris, London, Berlin, or elsewhere.