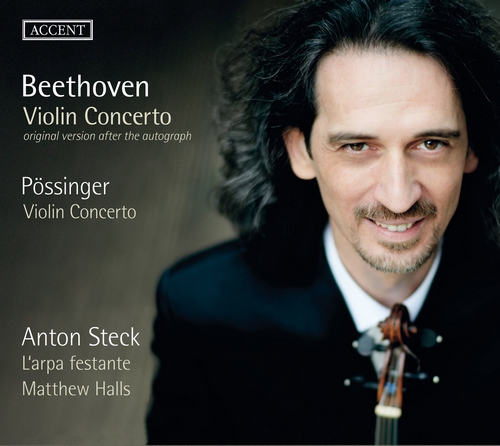 Franz Alexander Pössinger (1767-1827):
Konzert für Violine und Orchester G-Dur op. 9
It is unbelievable that such a popular work in the current repertoire as Ludwig van Beethoven’s Violin Concerto Op. 61 only conquered the concert hall around three to four decades after its composition. The work ultimately gained its popularity through two revised printed versions published in Vienna and in London, which both reveal substantial revisions in the solo parts. The quest for Beethoven’s “original version” proves to be extremely complicated, as Beethoven himself offered up to four alternatives to the soloists in some spots of the manuscript. A study of the different inks and quills used in that autograph has allowed the violinist Anton Steck to propose the new und unusual version recorded here, which thanks also to the use of historical instruments results in a tangible and transparent rendering of a very well-known piece.

In addition to Beethoven’s composition, Steck presents the world premiere recording of the Violin Concerto of the Viennese violinist Franz Alexander Pössinger – a friend of Beethoven who was probably involved in the revision of the solo part of his concerto. Pössinger’s work was written in 1805, just one year before Beethoven’s.
Recording: 22-25 May 2016, Martinskirche Müllheim (Germany), violin Alessandro Gagliano, Naples 1701