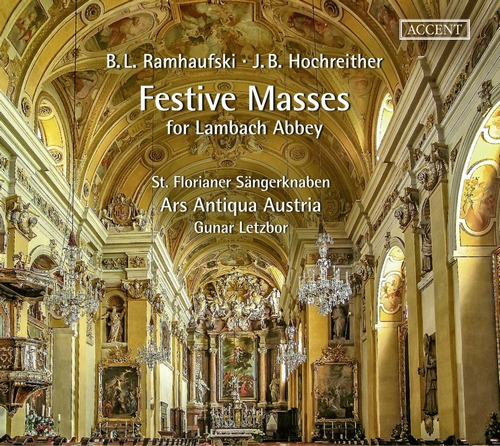 Hochreither:
Missa ad multos annos
The Benedictine abbey at Lambach in Upper Austria was founded in 1056. Research undertaken since 2002 has revealed a treasure trove of musical works written by musicians associated with the abbey. Two such composers are featured on this disc (previously released on the Symphonia label in 2006), which was recorded in the historic building itself: Beniamin Ludwig Ramhaufski (c 1631-1694) and the Salzburgborn Joseph Balthasar Hochreither (1669-1731), who perhaps studied with Biber. Hochreither's Missa ad multos annos was first performed at Lambach for the consecration of a new Abbot in 1705. The choral and instrumental elements are much like the older composer's style but the overall flow of the music is more imaginative in dramatic wordsetting, and the passages for soloists and consort are in a more elegant and expressive style. Ramhaufski's Mass a 23 is a finely crafted work that in no way suffers from comparison with Biber. “Ars Antiqua Austria play with commendable articulation and shapeliness, and the contributions from trumpets and trombones are particularly excellent. The small vocal force of St Florianer Sängerknaben, assisted by a few adult soloists, is very good indeed: consort passages possess attractive clarity and the fuller choral sections swell with the perfect amount of resonance.” (Gramophone)
Recording: February 2006, Monastery Lambach (Austria)