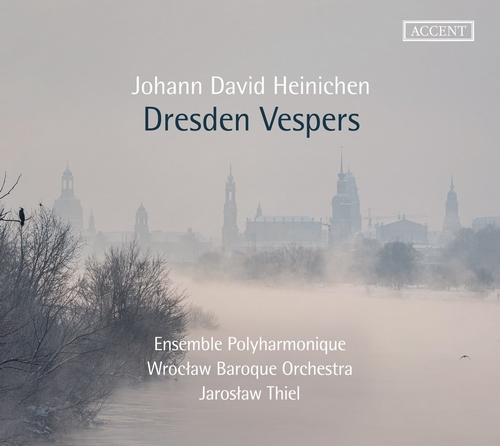 Dixit Dominus in F major, SeiH 44
Confitebor in G major, SeiH 32
Beatus vir in E flat major, SeiH 28
Laudate pueri in F major, SeiH 84
Laudate Dominum in F major, SeiH 83
Iste confessor in G minor, SeiH 58a
Magnificat in B flat major, SeiH 93
Alma Redemptoris Mater in E flat major, SeiH 23
Litania de Sancto Xaverio in C minor, SeiH 87
In the 18th century, Dresden developed into a magnificent baroque residence, which was soon given the nickname "Florence on the Elbe". Music played a special role in the representation of political power, and the "Dresden Court Orchestra" was famous throughout Europe. Dresden court life was Protestant in character, despite the politically motivated conversion of Elector August "the Strong" and his son, Elector Prince Friedrich August II, to the Catholic faith. This changed with the marriage of the Elector Prince to the strictly Catholic daughter of Emperor Joseph I, Maria Josepha. A new court had to be established and Catholic church music had to be built up along the lines of the Viennese imperial court. From then on, the Protestant court conductor Johann David Heinichen had to write splendid church music. The "Vespers for the Feast of St. Xavier" honoured the favourite saint of the new Electress, who appointed him special patron saint for Dresden. Heinichen's magnificent setting, available here as a premiere recording, once again demonstrates the importance of Dresden court music in this period.
Recorded 20 - 22 July 2021 at the Witold Lutosławski National Forum of Music, Wrocław (Poland).