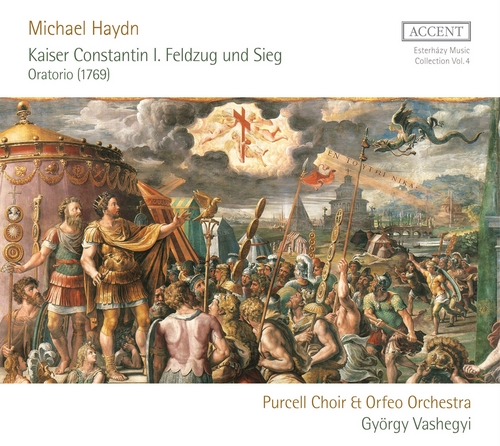 Michael Haydn:
Kaiser Constantin I. Feldzug und Zieg
Oratorio 1769
Michael Haydn was a widely respected composer during his lifetime, but after his death he was almost forgotten in the shadow of the epoch-making art of his elder brother Joseph. Only in recent decades has his great oeuvre been gradually rediscovered. The score of his oratorio "Emperor Constantine I Campaign and Victory" was long considered lost, but was only recently rediscovered in the Esterházy Music Archive in Budapest and is now being presented as the first time on sound recording. The work was written as an oratorio for Lent and first performed in Salzburg in 1762. The content revolves around Emperor Constantine I, who received a heavenly sign at the Battle of the Milvinian Bridge in Rome in 312, thereby achieving victory and converting to the Christian faith. Various allegorical figures such as Faith, Fortitude, Faintheartedness or Theology polemicise about Christian doctrine and faith until Constantine's victory becomes a certain fact. Michael Haydn sets this theological dispute to colourful and lush music, the artistry of which testifies to the high quality of the singers and especially the wind players at the Salzburg court.
Recorded at the Béla Bartók National Concert Hall of Müpa Budapest (Hungary), on 25-27 May 2016.