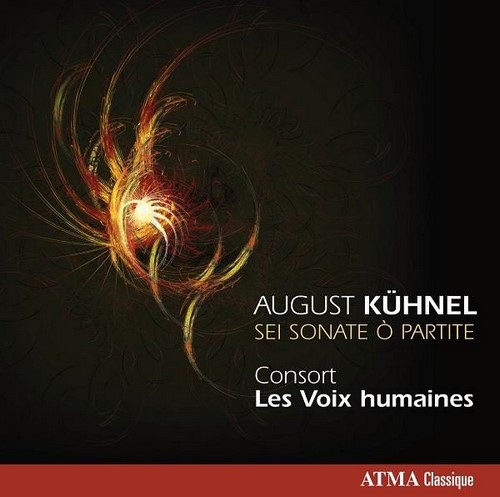 1. Sonata I in F major
2. Sonatina VI in echo in C major
3. Sonatina V (Serenata) in C minor
4. Sonata III in G minor
5. Sonata II en mi mineur
6. Sonatina IV in A minor
Though his output was modest, German composer August Kühnel (1645 - ca.1700) was nonetheless the most important master of the bass viol in Germany in his day. Most of Kühnel’s compositions are in manuscript form. The only exceptions are his Sonate o Partite ad una o due viole da gamba, con il basso continuo, (sonatas or partitas for one or two viols with continuo) which are performed by Consort Les Voix humaines on this new ATMA recording.

Originally dedicated to Kühnel’s employer, this collection of pieces would have been appropriate either for princely dining rooms or amateur gatherings. The collection’s title is also surprising, suggesting that each piece may be considered either a sonata or a partita. With its demands that the viol excel both in playing melody and harmony, Kühnel’s collection magnificently blends the Italian, French, and German styles, and shows that the composer was an elegant and sensitive virtuoso.

Their musical complicity has been compared to the skill of two trapeze artists or the telepathic communion of a pair of jazz saxophonists! Susie Napper and Margaret Little, the two gambists of Les Voix humaines, have been thrilling audiences worldwide with dashing performances of early and contemporary music for viols since 1985. For this recording the duo is joined by gambist Mélisande Corriveau, lutenist Sylvain Bergeron and harpsichordist Eric Milnes.
Sonate o Partite ad una o due viole da gamba, con il basso continuo ZankUkośnika (Sonatas or partitas for one or two viols with continuo)