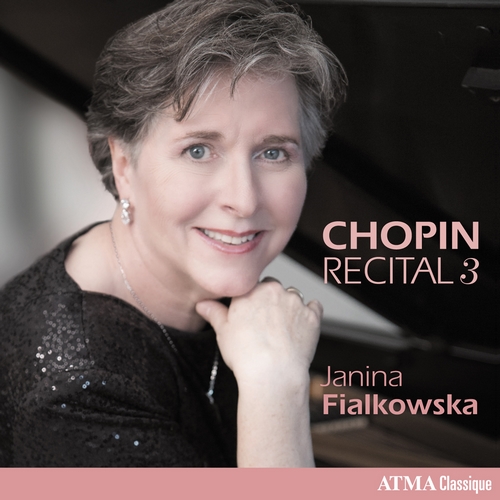 Polonaise No. 7 in A flat major, Op. 61 'Polonaise-fantaisie'
Nocturne No. 3 in B major, Op. 9 No. 3
Nocturne No. 5 in F sharp major, Op. 15 No. 2
Impromptu No. 3 in G flat major, Op. 51
Waltz No. 10 in B minor, Op. 69 No. 2
Waltz No. 5 in A flat major, Op. 42
Scherzo No. 4 in E major, Op. 54
Prelude Op. 28 No. 14 in E flat minor
Prelude Op. 28 No. 15 in D flat major ‘Raindrop'
Ballade No. 4 in F minor, Op. 52
On December 15, 1842, Frederic Chopin wrote to Breitkopf and Haertel, his publishers in Leipzig, offering them a newly composed Ballade and a Scherzo, and mentioning a new Impromptu. The pieces involved were the 4th Scherzo, the 4th Ballade, and the 3rd Impromptu, without a doubt three of the composer’s greatest works. Janina Fialkowska’s third Chopin Recital album is built around these late works. Also included is Chopin’s final major work, the Polonaise-Fantaisie, a piece which stirs up wild and wishful speculations over the direction in which his compositional genius was heading before his fragile life came to its tragically premature end.
Recording: Salle Raoul-Jobin, Palais Montcalm, Quebec (Canada), April 2016