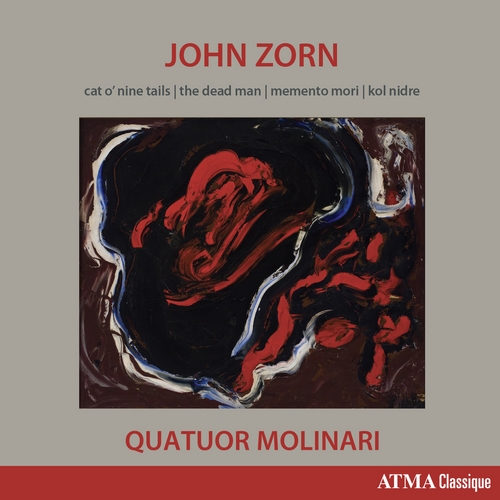 Cat O’Nine Tails
The Dead Man
Memento Mori
Kol Nidre
Recognized as a major influential figure in contemporary jazz and the avant-garde, the American composer John Zorn is characterized by his refusal of stereotypes and his radical musical experiments. His chamber music is the focus of the latest recording by the award-winning Molinari Quartet. “It is with great enthusiasm that we dive into the fantastic and fascinating world of John Zorn. His music is powerful, emotional, and colorful”, says Olga Ranzenhofer, first violin. The ensemble has selected four of Zorn’s chamber works for this recording: cat o’ nine tails, the dead man, memento mori and kol nidre.

The Molinari Quartet has established itself as one of Canada’s leading string quartets and has received nineteen Opus Prizes from the Quebec Music Council in recognition of its musical excellence. Critics describe the Molinari Quartet as an “essential” and “prodigious” ensemble, even “Canada’s answer to the Kronos or Arditti Quartet.”

The Molinari Quartet’s recordings on the ATMA Classique label include the complete quartets of Schafer, Schnittke, Kurtág, and Gubaidulina. These albums have received international critical acclaim including two Editors’ Choices by Gramophone magazine and rave reviews from The Strad, Fanfare, and Diapason, among others. The Molinari’s recording of the complete Kurtág quartets received a 2016 Diapason d’Or and the 2017 Echo Klassik award for 20th and 21st century chamber music.

The violinist Antoine Bareil succeeded Frédéric Bednarz as second violin of the Molinari Quartet in the spring of 2018, and this is his first recording with the Quartet. Concertmaster of the Orchestre symphonique de Laval, member of the Quatuor Voxopuli, Antoine Bareil has been described as a charismatic musician by The Montreal Gazette.
Recorded in Eglise Saint-Augustin, Mirabel, (Québec), Canada, October 2018