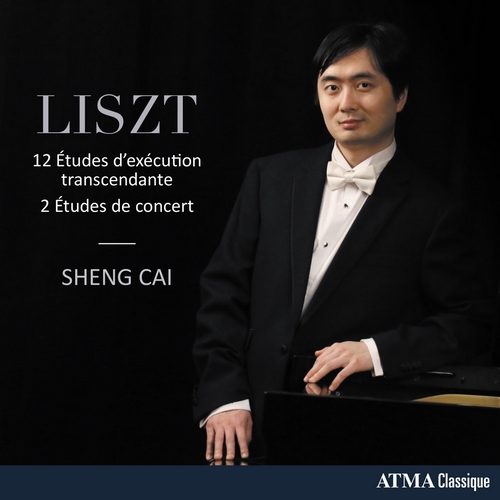 12 Études d'exécution transcendante, S139/R2b
2 Études de concert, S145/R6
For his debut album at ATMA Classique, pianist Sheng Cai tackles Franz Liszt's Etudes d’exécution transcendante, pieces that represent a pinnacle of the piano repertoire. The composer began drafting these études in 1824, when he was only 13 years old, and continued to revise them until the definitive version was published in 1852.

Recently described as "the most electrifying soloist of the 2017 season" by South Coast Today (Massachusetts), Canadian pianist Sheng Cai has embraced the romantic virtuoso keyboard tradition. His performances of major piano repertoire have touched audiences and won the praise of critics on three continents.

In North American solo recitals, Sheng Cai has been heard in many prestigious venues, such as Steinway Hall in New York, Jordan Hall in Boston, the Cleveland Play House, the Modern Art Museum in Fort Worth, the Alys Stephens Center in Birmingham, CBC's Glenn Gould Studio in Toronto, and other distinguished venues in Stratford, Elora, Montréal, and Winnipeg.