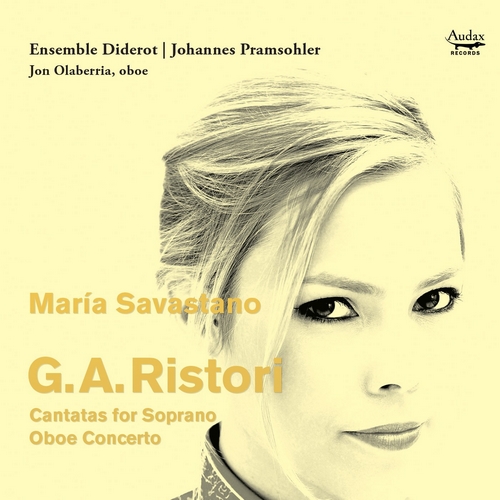 “Lavinia a Turno”
Cantata for soprano and orchestra

“Nice a Tirsi”*
Cantata for soprano and orchestra

Concerto in E-flat Major*
for oboe, strings and basso continuo

* - World premiere recording
Johannes Pramsohler and his Ensemble Diderot rediscover yet again a completely forgotten composer: Giovanni Alberto Ristori, vice-“capellmeister” under Johann Adolf Hasse at the famed Dresden court. The princess of Saxony wrote the libretti for three cantatas; three powerful monologues by three powerful women, masterfully set to music by Ristori: Dido, abbandoned by her love and in complete despair, throws herself into the flames; Lavinia, forced to leave her fiancé tries to explain her action; Nice, taken by hallucinations accuses Cupid as being very unhelpful. These three heroines are entrusted to the breathtaking vocal technique of an award winning soprano and to an ensemble that is setting new standards in the interpretation of baroque music. The brilliant oboe concerto will surely enter the repertoire of oboists everywhere. María Savastano has been hailed by La Nación as “the new Argentinean promise of classical singing.” The remarkably versatile and expressive singer was a member of the Instituto Superior de Artes del Teatro Colón and of the Atelier lyrique de l’Opéra national de Paris. Since her debut on the main stage of Paris’ Opera Bastille in 2008 as Papagena she has made her mark as an exceptional interpreter of Mozart and Donizetti. Today she is an internationally acclaimed singer and works with conductors such as Philippe Jordan, Emmanuelle Haim, Paavo Järvi, Tomáš Netopil, Jérémie Rhorer and Andreas Spering. She has sung with great success at the Teatro Real in Madrid, the Paris Opera, the Teatro Colón and the opera houses of Lille, Dijon, Nancy, Saint-Étienne and Rennes.
Recorded 22-24 August 2016, Gustav-Mahler-Saal, Toblach