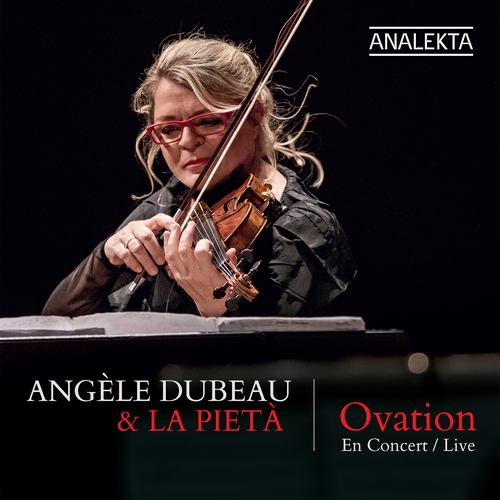 Ennio Morricone:
The Mission – Buona Fortuna Jack (arr. Antony Rozankovic, Gilles Ouellet)
Montreal, October 11, 2018 – In December 2017, with two sold-out concerts at the Maison symphonique de Montréal, the One Last Time tour by Angele Dubeau & La Pieta came to an end. This tour of thirtythree concerts was, for the violinist, an opportunity to thank her Quebec fans for the support they had given her throughout her career.

It was on that tour, during the concerts at Palais Montcalm in Quebec City, that Ovation was recorded. This new album features musical works composed by the likes of Einaudi, Richter, Glass, Enescu and Saint-Saens and which have been landmarks of the first 20 years of La Pieta’s career. The album also showcases a violinist at the top of her form and a concert where magic and perfection are in symbiosis.

Ovation is not only the culminating moment of that tour, its release crowns a year in which Angele Dubeau received several honors.

Ovation eloquently demonstrates the audacious artistic journey of Angele Dubeau, a musician who has always distinguished herself by the quality of her playing and her musical accomplishments.
Recorded live in concert, on November 5th 2017, during Angele Dubeau & La Pieta tour “One Last Time” at Salle Raoul-Jobin of the Palais Montcalm, Quebec City, Canada. Angele Dubeau plays the “Des Rosiers” Antonio