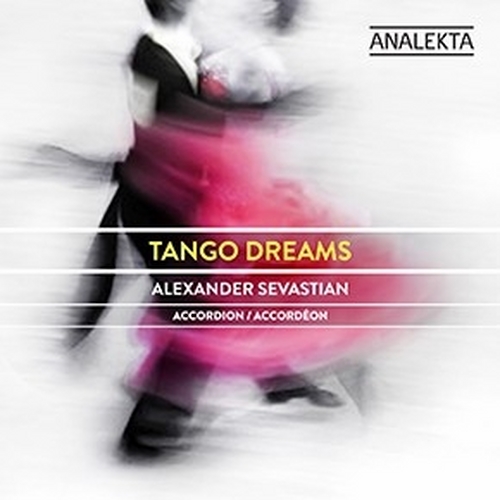 Tango is the product of people drawn together on the margins of Buenos Aires in the late nineteenth century. From the pimps and prostitutes of the bars and slum districts on the outskirts of the capital to the ports of Montevideo and Rio de la Plata, the music of the people merged – Andalusian Flamenco, southern Italian melodies, Cuban habanera, African candomblé percussion and milonga (the Argentine gaucho song). Machismo and violence were part of the tango culture, with male dancers often having a predatory and threatening quality.

The spirit of tango music is expressed in a famous tango lyric: “I will make my heart drunk, so I can toast to the frustration of love.”

Astor Piazzolla (1921-1992) was a pioneer of "tango nuevo" or "new tango". He was the first tango composer whose music made the giant leap from dance clubs and cabarets to world-class stages. Franck Angelis, who is very well known in accordion circles, has made a wonderful composition based on Piazzolla's tango Chiquilín de Bachín (A Little Boy from Bachin). This piece has numerous dramatic cadenzas, virtuosic variations and a gorgeous melody.

Adio Nonino (Farewell, Grandpa) was written in 1959, soon after the death of Piazzolla's father, Vicente. This tango, one of Piazzolla's most popular compositions, has had many arrangements and recordings.

Sentido unico (One Way) was inspired by the one-way traffic sign that Piazzolla saw in Paris, where he had gone to study classical composition.

Contrabajeando (Double Bass) is one of Piazzolla's signature tangos, with a great solo for the left hand!

Flora's Game is a slow and painfully beautiful poem with a virtuosic middle part. Originally written for the piano, it appears on this CD in an adaptation for accordion by Richard Galliano.

La Cachila is named after a small bird found in the Argentine Pampas, but it might also have been the nickname of one of the composer’s female companions. Played for the first time in Montevideo, La Cachila has since been recorded an impressive number of times, as many orchestras include it in their repertoire.

La Cumparsita (The Little Parade), by Uruguayan Gerardo Matos Rodriguez, is probably the most famous tango ever written. In 1997 it became the official cultural anthem of Uruguay.

The prominent composer and arranger Dmitriy Varelas has a long history of working and writing for the accordion. His arrangements of La Cumparsita and Adios Nonino are hugely successful and always in demand.

Devotion (to Astor Piazzolla), by Russian Vyatcheslav Semenov, was written in 1992 in memory of the great Argentinian composer.

This music, on the list of compulsory pieces at the major accordion competition in 1994, was selected by 95% of contestants. Devotion is a spiritual and meditative work that requires good control of the emotions and depth in interpretation.

Tango Dreams, for accordion and string trio, a commission from Canadian accordionist Joseph Petric (with the aid of a grant from the Ontario Arts Council), was written in 2002. That year, Petric first performed it with the Adaskin String Trio in the small Quebec town of Elgin, and they later toured Quebec and Ontario with Tango Dreams. In 2010 Ray Luedeke created a touring tango show, Close Embrace, incorporating Tango Dreams as its finale. In 2011 choreographer David Earle of The David Earle Dance Theatre created a ballet with Tango Dreams.

The music of Tango Dreams is meant to express the spirit of Argentine tango. It incorporates typical motifs and rhythms from the golden age of tango (1935-1955) without ever actually quoting a pre-existing melody. Sections of tango-like music are interspersed with music of a different style, the whole suggesting a dream-like landscape and a psychological journey from introspection to exultation.