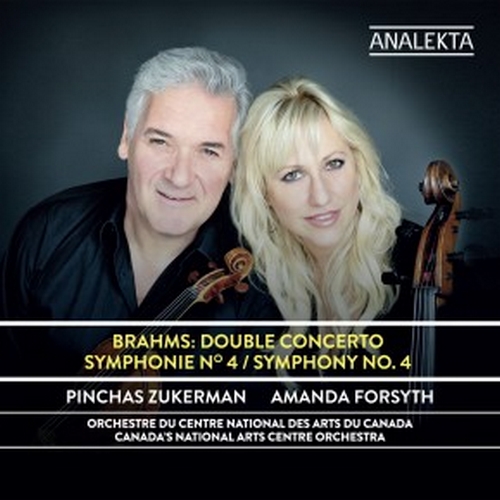 Brahms wrote his last purely orchestral composition in 1887, ten years before his death. That year, he spent the summer in Switzerland, near Lake Thun, enjoying the scenery and the attractions of the region. Brahms and the famous Hungarian violinist Joseph Joachim had been great friends for many years, but their friendship was marred when the composer had sided with Joachim's wife during a domestic dispute. After a long silence, Brahms tried to reconnect with his old friend. The collaboration of the two men at the Double Concerto was the pretext for an extensive correspondence, and Brahms probably considered this work as a way to reconcile completely with violinist. The piece was created in private to Baden-Baden Brahms to the pulpit and Joachim and Robert Hausmann (cellist of the Joachim String Quartet) as soloists.

The first public performance took place in Cologne, October 18, 1887, with the same artists. Although work remains the least played of the four concertos by Brahms, it is by its fantastic power, its catchy melodies and sublime aesthetics, one of the greatest achievements of the composer. The compositions for this combination of solo instruments are not legion. There has been some prior Brahms - Vivaldi (three!), Johann Christian Bach, Leopold Hofmann, Josef Reicha, Carl Stamitz, Donizetti and Antonín Vranicky - but none that is as successful. Brahms and after it took until Delius (1916) to see such a concerto out of the pen of a great composer. Other obvious examples are Sinfonia concertante by Miklós Rózsa (1966) Heifetz and Piatigorsky composed for, and Robert Starer Concerto (1968). For one reason or another, however, has emerged in recent years a plethora of double concertos for violin and cello, signed in particular by Arvo Pärt, Ellen Zwilich Taffee and Philip Glass. The tessitura of the two solo instruments are very remote, but Brahms manages to integrate them into a concerto that enhances the tonal beauty of each, while offering many opportunities for all games. These characteristics are evident from the opening bars of the concerto. The full orchestra starts emphatically before being interrupted after only four measures, as in the middle of a sentence, for the solo cello ruminating darkly theme.