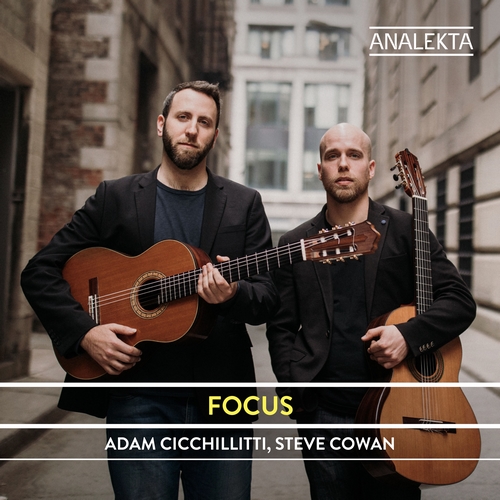 Jason Noble:
River and Cave
Guitarists Adam Cicchillitti and Steve Cowan present their impressive new album Focus that features world premiere recordings of works for guitar duo. Infused with a myriad of differing influences and exhibiting a vast array of guitar techniques, these works are both richly flavoured and enticing in their varying musical approaches. The duo display an impressive technical assurance and admirable interpretive insights. The latter is hardly surprising, as the guitarists had the privilege of preparing the program of works with their respective composers.

Adam Cicchillitti and Steve Cowan have received several media accolades over the past years: the renowned American magazine Classical Guitar praised Cicchillitti as a “superb” and “exceptional Canadian guitarist” and Cowan as “one of Canada’s top contemporary classical guitarists.” The two award-winning musicians and long-time friends joined forces in 2015 to form a duo that focuses on expanding the contemporary classical guitar repertoire through commissions and collaborations with living composers. The ensemble’s vision aims to break down traditional notions of classical music presentation through their unconventional programming, curated to stimulate the classical connoisseur and the general public alike by bridging classical and popular music genres.