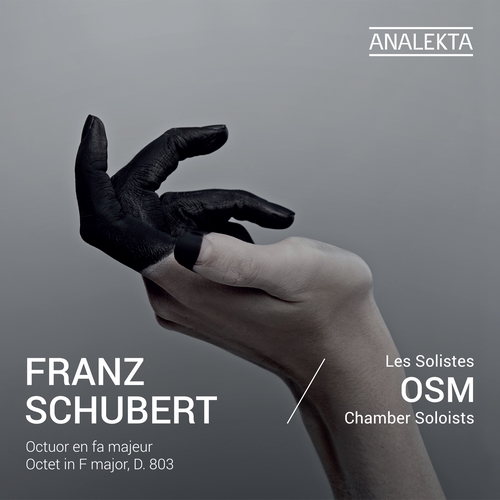 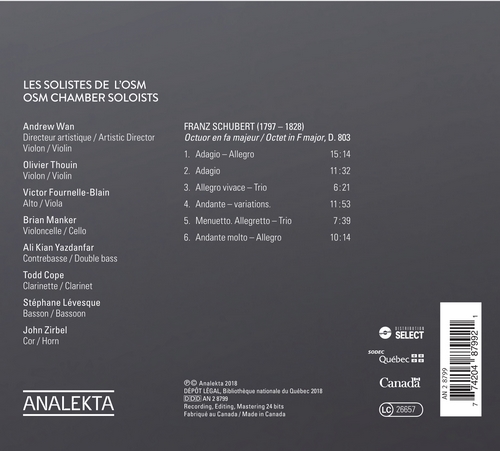 The second album in the series of recordings by the Orchestre symphonique de Montréal Chamber Soloists, under the artistic direction of Andrew Wan, concertmaster of the OSM since 2008, is devoted to the Octet in F major, D. 803 by Franz Schubert. This ambitious and appealing composition is one of the most iconic chamber music works in Western art music.

The high-level musicianship and osmosis of the OSM Chamber Soloists make this luminous work ever more impressive and the result is an exceptional album.

For the OSM Chamber Soloists, recording Franz Schubert’s Octet in F major, D. 803, was the logical next step after Beethoven’s Septet in E-flat major, Op. 20, their first album released in January 2018, because of the fact that Beethoven's work was Schubert's reference for his Octet.
This album was recorded at Église St-Augustin de Mirabel, Québec, Canada, in April 2018. Andrew Wan performs on a 1744 Michel’Angelo Bergonzi violin. Olivier Thouin plays a 1754 Michele Deconet violin. Victor Fournelle-Blain plays a J.-B. Vuillaume viola.