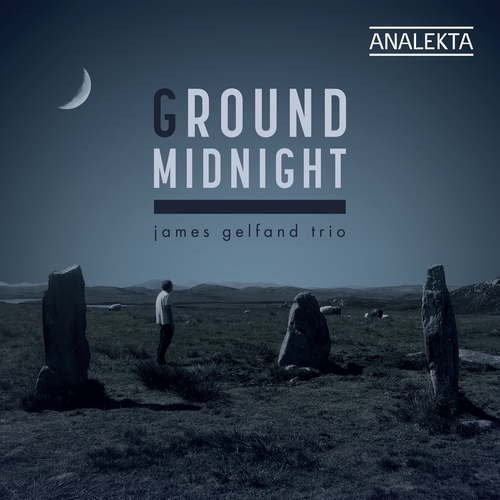 T. Monk/C. Williams/B. Hanighen:
Ground Midnight (arrangement of '‘Round Midnight' by J. Gelfand)
Over the past 15 years, I have focused my musical career on scoring soundtracks for movies and television; and while it has been creative and productive, I have missed the pleasure and inspiration of performing and recording improvised music. Then two years ago, out of the blue (not blues…), I got a call from an old high school friend, Mervon Mehta, the musical director of the prestigious Koerner Hall in Toronto, asking me to perform in his 2017 Jazz Trio series, opening for the Christian McBride Trio. Although hesitant at first, being very busy working on films, I started to embrace the idea of getting back into performing, putting a trio together, and creating a repertoire for the concert.

The first order of business was finding a bass player and drummer to accompany me. I immediately thought of Morgan Moore and Jim Doxas. What drew me to these two outstanding musicians was their openness to all styles of music and their technical and improvisational skills. Fortunately, they were both available!

Then there was the repertoire. I have always been drawn to the idea of composing and arranging music for albums with an overall concept in mind. On my album Time Zones, I composed all the tunes with different odd-meter time signatures coupled with very diatonic melodies. Children’s Standards featured arrangements of well-known children themes. My solo album, Convergence, joined classical and jazz styles juxtaposed with classical and jazz composition.

For this new project, I incorporated different types of specific compositional devices to give each tune and arrangement a conceptual vision.
This album was recorded at Studio PM, Montréal, in May 2018.