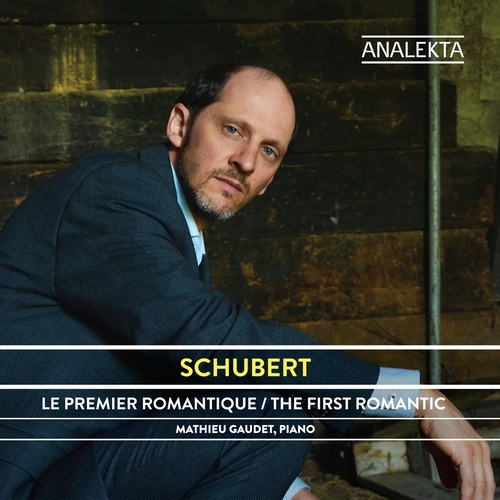 Sonata No. 8 in F-sharp minor, D. 571
Sonata No. 17 in G major, Op. 78, D. 894
In May 2019, pianist Mathieu Gaudet completed his series of twelve recitals presenting the complete piano sonatas of composer Franz Schubert. The new album Schubert: The Complete Sonatas and Major Works for Piano, Volume 1 - The First Romantic is the first chapter of this major recording project. Recorded in June 2019 at the Palais Montcalm, this album proves beyond a doubt that Mathieu Gaudet is one of the great contemporary interpreters of Schubert's repertoire.

The Sonata in F-sharp minor, D. 571 from 1817 is the fifth in a cycle of six experimental works that carry the seeds of burgeoning Romanticism. The “Andante” is shaped as a Romance, superimposing long tenor-range melodies with a pearl-style accompaniment in the right hand. As for the finale, its opening bravura theme leads to a more melodic motif before expiring over a sequence of repeated pianissimo chords of fearsome difficulty.

The great Sonata in G Major, D. 894, dated 1826, is the last one Schubert composed before producing, in 1828, his ultimate trilogy and testament to the sonata genre. The placid majesty of its first movement, whose opening chords resonate like waves upon calm water, is unequalled except for the very last sonata, D. 960. The dramatic power of its development section, reaching the fortississimo dynamic, is unique in the composer’s output for piano.
Recorded June 17 to 19, 2019 in Raoul-Jobin Hall at Palais Montcalm, Quebec City. Piano: Steinway. The Schubert's Complete Sonatas and Major Works for Piano, Volume I.