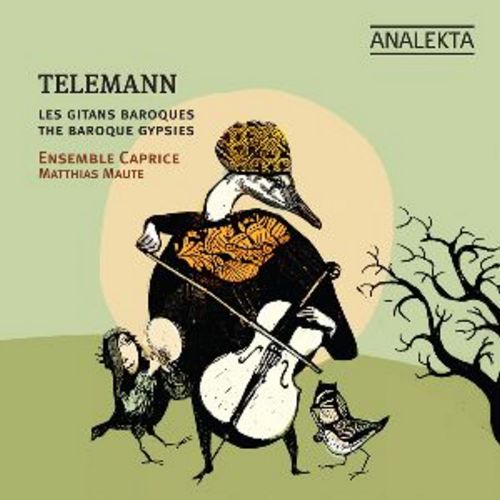 Telemann: Telemann and the Baroque Gypsies

Gypsy pieces from the Uhrovska Collection 1730
The Ensemble Caprice members are putting on their gypsy attire! Following a wild journey along with Vivaldi on the bohemian road, they do it again with Telemann! High-octane performances of the composer's oeuvre are intertwined with sparkling Matthias Maute's arrangements of gipsy pieces. All the colors and opulence of a unique cultural heritage offered to you.

From Telemann's own writings, after listening to gypsy musicians and their music:

One can hardly believe what wonderful imaginative ideas these pipers and fiddlers have as they improvise. In only a week, a composer could be inspired for an entire lifetime. I have written several major concertos in this style.

Georg Philipp Telemann (1681-1767) was only 24 years old when he was appointed to his first position at court. Mostly self-taught, he was familiar with all orchestral instruments and could play the harpsichord, recorder, transverse flute, chalumeau (the baroque predecessor of the clarinet), brass instruments like the trombone, and even the calcedon (a 5-stringed lute) in addition to the mandatory string instruments. His versatility evidently outshone the talent of even the most multi-instrumentally trained baroque musicians.

By 1705, the young Telemann's reputation as an innovative composer and flexible instrumentalist had advanced his career so quickly that he was appointed Kapellmeister to Reichsgraf Erdmann II at his castle in Sorau (in today's Poland). However, despite the auspicious beginning to his career, even a privileged courtly musician like Telemann was at the mercy of the political troubles of his times. In February 1706, the Great Northern War waged by Augustus II the Strong caused the entire court to flee from Sorau and Telemann was unable to return for four months. However, the industrious Telemann had visited Kracow and Pless during this time and familiarized himself with Polish and Moravian music, which he described as having "barbaric beauty”.

As mentioned in his autobiographies, Telemann's encounters with Eastern European gypsy music influenced his own compositions. The young composer must have been enthralled by the wonderful inventiveness of this music, as typified in this recording with the last movements of the Caprice Symphony and the Concerto in e minor for recorder and flute.

In addition to melodic construction in the pastoral genre that was considered aesthetically pleasing at the time, the fashionable Polonaise also contributed to making Eastern European folk and gypsy music court-worthy. The door to this eastern-oriented cultural expansion had only recently been opened as a consequence of the appointment of Augustus II, Prince Elector of Saxony, to the Polish Kingship in 1697 and Telemann did not lose the opportunity of embracing it.

At this point, Telemann's infallible sense of sound colour became invaluable. The unusual instrumentation of the Caprice Symphony, with its constellation of solo instruments is unique in the history of western music and would have given this witty composer great pleasure. The piccolo transverse flute, which is strengthened by a regular flute doubling it an octave lower, is combined with an oboe and a chalumeau, as well as two solo double basses, all accompanied by a string ensemble.

The gypsy melodies and dances presented here are from the spectacular Uhrovska Collection of 1730, a volume containing 350 melodies that were in all probability assembled by a scholar wishing to produce a comprehensive compendium of the gypsy people's music. This pancultural treasure of Eastern European music reveals Hungarian, Polish, Slovakian and geographically-indefinable European influences. True to the oral tradition of gypsy music, only the melodies themselves are documented, since it was assumed that any accompaniment would be improvised. In keeping with this practice, we have made our own arrangements, leaving room for improvisation while fully exploiting their harmonic and rhythmic richness. The untamed virtuosic strength and expressive melancholy of this music has lingered with us for some time, and yet we continue to discover fresh nuances in this lavishly developed gypsy art.

In this recording, we are musically re-enacting the encounters of Telemann with the gypsies of Eastern Europe. The direct dialogue between individual movements from the Trio Sonata in d minor and the Paris Quartet with melodies from the Uhrovska Collection depicts a conversation in which commonalities as well as differences are made unabashedly explicit.

Telemann's compositional methods in his "Polish” works follow his own self-imposed rules, as is illustrated by the last movement of the famous Concerto in E minor for recorder and flute, in which some of the Polish tutti melodies are interrupted by quintessentially baroque and virtuosic solo passages. The contrast and dazzlingly fast shifts from one culture to another result in a rich play of colour that captures our attention in the same way that it intrigued listeners during the eighteenth century. The "barbaric beauty” that Telemann discovered in Polish and Moravian music is also imbued with eternal youth.