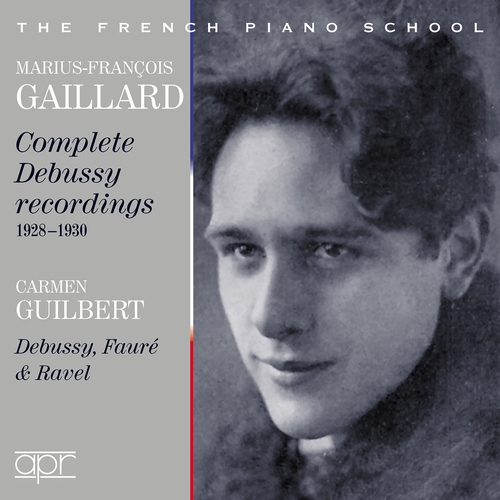 Ravel:
Alborada del gracioso (No 4 from Miroirs)
This release launches an important new APR series devoted to the French Piano School. For around 150 years France has nurtured a distinctive style of pianism centred on the teaching of the Paris Conservatoire. The heyday of the school was probably the first fifty years of the 20th century and this series of recordings aims to explore in depth the often-forgotten recordings made at this time.

Marius-François Gaillard was the first pianist to perform the complete piano works of Debussy in concert, which he did first in 1920, and again in 1922. He subsequently made the recordings featured here, and these were by far the largest body of Debussy piano recordings until the 1930s. As such they give us the closest view of Debussy playing to the composer’s own time and reveal a clarity and objectivity which exemplifies the traditions of French pianism but is somewhat different from the ‘impressionist’ style of Gieseking which was to follow and become the accepted model. Gaillard later pursued a career as a composer and his early recordings were forgotten. To commemorate the 100th anniversary year of Debussy’s death, this is their first reissue.

Carmen Guilbert also had a short active career, but as a pupil of Marguerite Long her playing, particularly of Fauré, is important. These are her complete classical recordings, though she also recorded three discs of Billy Mayerl!
Odéon recordings 1928-1930; Pathé recordings 1930-1938