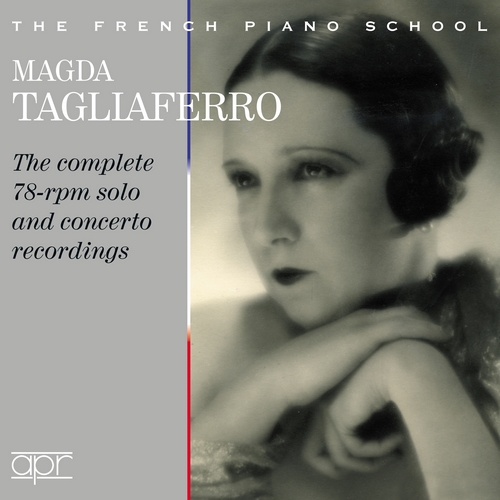 Saint-Saens:
Piano Concerto No. 5 in F
French training and Brazilian temperament are combined in the brilliant and passionate playing of Magda Tagliaferro (1893–1986) who regarded Cortot as her most important influence and teacher. Her friendship with Reynaldo Hahn inspired the composition of the piano concerto dedicated to her and its subsequent premiere recording is included here. Hahn’s conducting can also be heard in her little-known early Decca recording of the Mozart ‘Coronation’ concerto. Another significant premiere recording is that of the Fauré Ballade. Tagliaferro shows a real affinity with the composer’s music and indeed the recording of the 1st Violin Sonata with Denise Soriano won a Grand Prix du Disque in 1936. An award Tagliaferro had previously gained in 1930 for the Mompou disc also included here.
Recordings: 1928-1954.