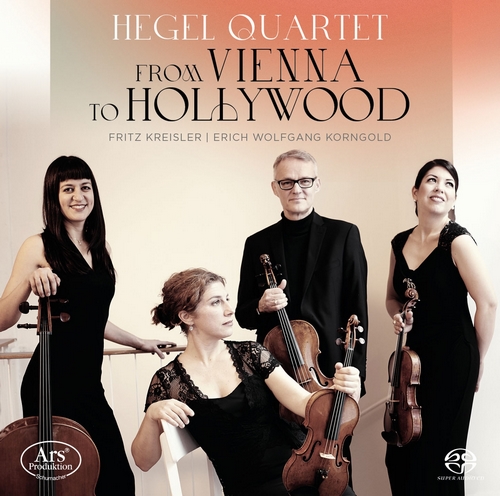 Kreisler / Korngold: From Vienna to Hollywood

Korngold:
Streichquartett No. 3
Three pieces from much ado about nothing, Op. 11
The members of the Hegel Quartet, grew up in different parts of the 'New World': Australia, USA and Canada. In search ofthe roots of the musical traditions in which they grew up, each of them made their own way to Europe during their studies. It was pure coincidence that they met in mid-life, having already absorbed so much of the legendary musicians who make the European concert scene so rich. Composers Fritz Kreisler and Erich Wolfgang Korngold, like so many other Jewish artists, escaped the turmoil of the World Wars in the last century and eventually became citizens of the United States.

These two great artists, and many others in similar life situations, created a thriving cultural paradise in their new homelands - for example, in South America, Canada, or Australia - that produced generations of artists. Even at the height of his success as a Hollywood film composer, Korngold greatly missed Vienna and its opera houses, and it seems that he died of a broken heart after unsuccessfully trying to re-establish himself in 1950s Europe.

The Hegel Quartet’s new recording of these works is also accompanied, in a modest way, by a desire to repatriate, as it were, Kreisler and Korngold to their beloved Europe by four emigrants from the opposite direction.
Recording: 26-29.10.2021, Studio b-sharp.