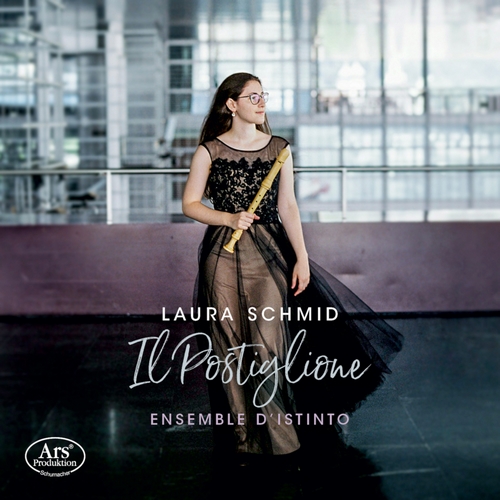 Jan Dismas Zelenka:
Canoni, ZWV 191 /
Laura Schmid, born in Stuttgart in 1989, began her recorder studies in Carsten Eckert’s youth class at the Trossingen University of Music in 2007. In 2009 she continued to study with Carsten Eckert as part of her undergraduate course at Bern University of the Arts (HKB), graduating with distinction in this as well as in her postgraduate education degree at HKB with Michael Form. She also successfully completed the Master’s degree in Specialized Music Performance (soloist diploma) in 2016, earning the distinction “Excellent”.

The programme selected for her production 'Il Postiglione' contains some particularly precious pearls of chamber music for recorder. These are original works and arrangements, in keeping with the musical use of the late Baroque period. All three composers on this CD for ARS PRODUKTION were closely associated with the musical life at the Saxon court in Dresden.
Recording: Martinskirche Basel, 2017