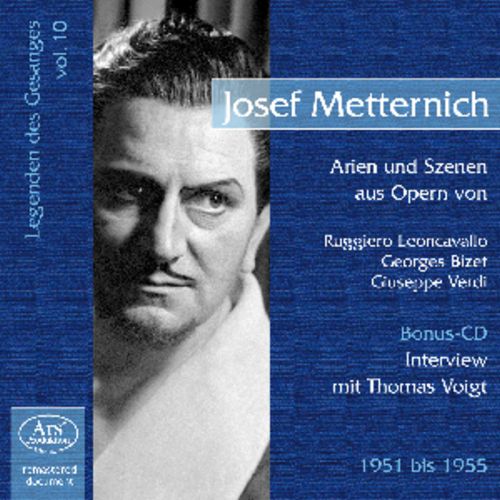 + Bonus-CD (interview with Thomas Voigt, 1990/2000, 53 min.)
The German baritone Josef Metternich (1915-2005) sang with the Cologne and Bonn choruses, before making his solo debut in 1941 with the Berlin State Opera in Lohengrin. His career was delayed by the war, it really took off in 1946, when he was able to return to the opera stage and was re-engaged at the “Berlin Städtische Oper”, where he appeared in roles such as Jago, Alfio, Simone, Pizarro, Escamillo, Figaro (Rossini), and Amonasro, all of them within the same year! Metternich made his debut at Covent Garden in 1951, as Flying Dutchman. From 1952 until 1959 he was a member of the Vienna State Opera and appeared at La Scala, the Grand Opéra of Paris, the Edinburgh Festival (1952) and at several German opera houses. From 1953 until 1956 he joined the Met, where he debuted as Don Carlos (La forza del destino). His roles at the Met included 22 performances (Tonio, Renato, Amonasro, Wolfram and Kurwenal). From 1954 he was a member at the opera houses of Munich, Berlin and Hamburg. He retired in 1971 after performing for more than three decades Metternich was a powerful singer with a vibrant voice of outgoing directness. He managed to sing Verdi’s high tessitura with ease, his metallic top register was almost that of a tenor.
Rec.date 1951-1955