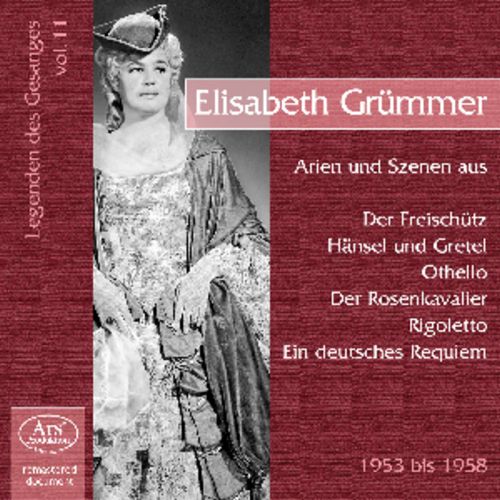 Arias & Scenes from - Die Zauberflöte, Le nozze di Figaro, Cosi fan tutte (Mozart), Der Freischütz (Weber), Hänsel & Gretel (Humperdinck), Othello (Verdi), Der Rosenkavalier (R. Strauss), Ein deutsches Requiem (Brahms)
Elisabeth Grümmer became in 1946 a regular member of the Städtische Oper Berlin (now the Deutsche Oper), which was her primary professional association throughout her career, remaining with that major company through 1972. Berlin always remained the centre of her activities. She sang with greatest success in all the world’s leading opera-houses, at Covent Garden, La Scala, the Met, the Teatro Colón, and the State Operas of Munich, Vienna and Hamburg. Grümmer made her debuts at the Salzburg Festival in 1953, at the Glyndebourne Festival in 1956, and at the Bayreuth Festival in 1957, where she was to be heard every year until 1961. In April 1967 she made her debut at the Metropolitan Opera New York as Elsa in Lohengrin.

Elisabeth Grümmer’s exquisite voice and admirable dramastic gifts made her an exemplary interpreter of the music of Mozart and Richard Strauss. She restricted herself to a rather small repertoire she made very much her own: Pamina, Donna Anna, Ilia, the Countess Almaviva, Agathe, Hänsel, Oktavian, the Marschallin, Countess Madeleine, Eva, Elsa, Elisabeth, Gutrune, Freia and Desdemona.