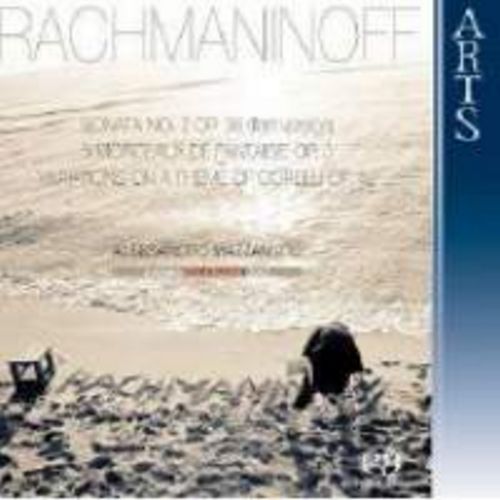 Sergej Rachmaninoff (1873-1943) was one of the most important Russian composers and one of the greatest pianists of all times. At the piano he had a particular touch, a sound that Arthur Rubinstein described as the “golden tone”, and an irrefutable magnetism able to capture and enchant his audiences. In this recording we can hear the Sonata No. 2 op. 36 in its first version, begun in Rome in 1910 and completed in Moscow in 1913. The five Morceaux de Fantaisie op. 3 were written in 1892 and represent the young composer’s first important milestone. The Variations on a Theme of Corelli op. 42 (1931) is his last significant work for piano and one of his most accomplished cycles of Variations. Throughout the twenty Variations, Rachmaninoff maintains an exemplary clarity and linearity in the conduct of the parts, a characteristic perhaps deriving from his experience in the classical and romantic repertory gained as a concert pianist during his American years from 1918 onwards.

The young Sicilian pianist Alessandro Mazzamuto, making his recording debut, was the winner of the Lodovici Prize, awarded by Martha Argerich during the 2011 Busoni Competition to the contestant who showed the greatest flair for a recording project: that is to say, originality of performance and the ability to root out and explore the poetic contents of the scores. In other words: a true artist.

Look forward to this first recording of Alessandro Mazzamuto and the second release in collaboration with the organisation „Donatori di Musica“ (a network of musicians, doctors, nurses, volunteers, patients and families of patients, whose aim is to organize regular series of concerts in hospitals, totally and absolutely free-of-charge) and Arts Music, which is presented as high-quality, multi-channel Hybrid SACD and superior 24 bit/96 kHz sound quality.
Recorded at the Fazioli concert Hall, Sacile,; Pordenone, Italy; June 20-22, 2012