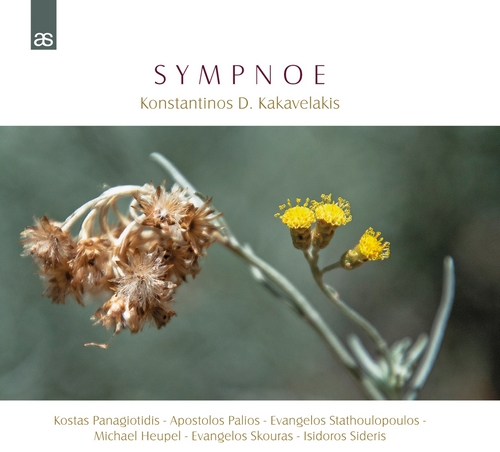 Avi Music - AS 5091
Kompozytor
Konstantinos D. Kakavelakis
Wykonawcy
Kostas Panagiotidis, violin
Evangelos Stahoulopoulos, flute
Isidoros Sideris, cello
Evangelos Skouras, horn
Michael Heupel, cello
Apostolos Palios, piano
Sympnoe, for Violin and piano, in three parts
Amarantos, for piano, flute, horn, violin and cello
Evenos, Duo for flute and cello
Poros, in three parts, for piano, flute, violin and cello
Anthemis, for flute solo
The urgent dilemma of the abused nature and the reconstructed environment is presented, in the multifaceted musical composition „Sympnoe “ by Konstantinos D. Kakavelakis as an imaginary inquiry, in a time period in which climate change, coincidence and the rapid social changes and technological evolution are playing a very important role for the global organisms in relation to the values of nature.

The compositions are dedicated to love and the experienced nature, which are connected with musical thinking. The plants „Helichrysos“, „Evenos“ and „Anthemis“ are playing a central role in the composition as rare plants of Europe, existing also on the islands of the Aegean Sea. They are appearing in the musical process in a fi ctive manner „combining“ the state of „common breath“ and mental feedback between man and nature as a self regulation in the overall management of the narrow point of the reserves of the nature‘s capacities and the intellectual heritage of humans. „Poros“ is linked to the narrow paths and associations of the biological paths associated with the rhythms of memory. (Mnemosyne)

The composition is dedicated to the founders of Athens Botanic Garden Alexandre Diomides (ex – Prime Minister of Greece, his wife Julia Diomides and Prof. Herta Hammerbacher researcher and designer of the natural landscape for their perennial commitment after the awesome events of the WWII to keep Athens Botanic Garden as a Place of Peace, thoughtfulness and also place of the natural-landscape.
Recording: SIERRA STUDIOS, 9 Mesogeion Av., Athens, October 21, 2017.