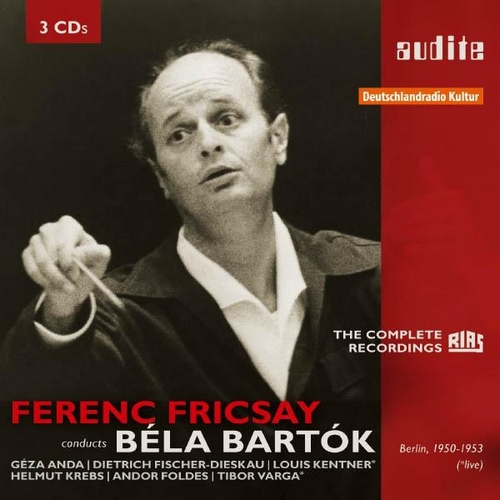 Violin Concerto (No. 2) (dedicated to Zoltán Székely)
Deux Portraits, Op. 5
Cantata profana (Die Zauberhirsche)
Musik für Saiteninstrumente, Schlagzeug und Celesta (dedicated to Basler Kammerorchester and its leader Paul Sacher)
Tanzsuite
Divertimento
Rhapsody for Piano and Orchestra, Op. 1
Piano Concerto No. 2 (Geza Anda)
Piano Concerto No. 3 (Louis Kentner)
The project of a representative, possibly even complete, recording of Bartók's oeuvre formed a part of Fricsay's work from the beginning of his time in Berlin. These RIAS recordings feature almost exclusively Hungarian artists for the solo parts: a novelty at the time. In Fricsay's view, Hungarian soloists were best suited to realising his precise concept of the close relationship between, on the one hand, Hungarian language and culture and, on the other, interpreting Hungarian music authentically. The only exception is Fischer-Dieskau, whom Fricsay much admired.This compilation from 1951 until 1953 includes all surviving Bartók recordings from the RIAS archives with Fricsay. It begins with opus 1, the Rhapsody for piano and orchestra (1904) and conceived in an entirely Hungarian idiom, and goes via the expressionist, agitated Deux Portraits Op 5 (1907-08) and the powerfully optimistic Dance Suite (1921) up to the masterworks of the 1930s: the neo-baroque influenced Second Piano Concerto (1930-31), the archaic, fairytale-like and darkly coloured Cantata Profana (1932), the splendid Music for Strings, Percussion and Celesta (1935), the lucid Second Violin Concerto (1937-38) and the mysterious Divertimento of 1939 with which Bartók marked the beginning of his inner farewell to Europe. Even today, more than sixty years after these recordings were made, Fricsay's intensity is perceptible for the listener as an existential experience - both in the impetus and the positive power of the rhythm, and also in the mysteriously resigning and ironically contorted moments in this music which is so rich in nuances. This was made possible by the cooperation with other world-famous alumni of the Budapest Music Academy where Fricsay had himself studied: the pianists Géza Anda, Andor Foldes and Louis Kentner, as well as the violinist Tibor Varga. Dietrich Fischer-Dieskau joined Fricsay as a soloist in the opera Bluebeard's Castle and the Cantata Profana. His singing (albeit in German) congenially corresponded to Fricsay's ideal of dramatically thrilling and passionately precise Bartók interpretation.There is a "Producer's Comment" from producer Ludger Böckenhoff about this production available at http://www.audite.de/de/download/file/304/pdf.html. The production is part of our series "Legendary Recordings" and bears the quality feature "1st Master Release". This term stands for the excellent quality of archival productions at audite. For all historical publications at audite are based, without exception, on the original tapes from broadcasting archives. In general these are the original analogue tapes, which attain an astonishingly high quality, even measured by today's standards, with their tape speed of up to 76 cm/sec. The remastering - professionally competent and sensitively applied - also uncovers previously hidden details of the interpretations. Thus, a sound of superior quality results. CD publications based on private recordings from broadcasts or old shellac records cannot be compared with these.
Rec. Berlin (live) 1950-1953