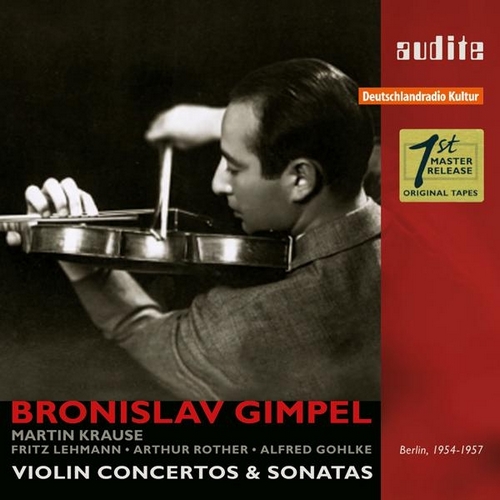 Schubert
Schuman
Mendelssohn-Bartoldy
Schumann
Janacek
Tartini
Rathaus:
Sonatas
The new Bronislaw Gimpel edition presents on three CDs all recordings made by the violinist between 1954 and 1957 for the RIAS Berlin. Not only do they illustrate the striking violinistic profile of the artist, but also the stylistic palette of his repertoire.Bronislaw Gimpel (1911-1979) was one of the "old school" violin virtuosos. His distinctly individual approach towards sound and phrasing left a strong mark in the history of violin playing. Gimpel was born in the Galician city of Lemberg, today's Lviv in the Ukraine. He received his musical training at the conservatoires of his home city as well as Vienna, and at the Berlin Musikhochschule with Carl Flesch. Gimpel established an international and versatile career as a soloist, concert master, chamber musician, conductor and violin teacher.This release is furnished with a "producer's comment" by producer Ludger Böckenhoff.This CD forms part of our series "Legendary Recordings" and bears the stamp "1st Master Release". This term stands for the exceptional quality of audite's archive releases which are all, without exception, produced using original tapes from the radio archives. Usually, these are the original analogue tapes with tape speeds of up to 76 cm/s which are of astonishingly high quality, even by today's standards. In addition, the process of re-mastering - executed with professional expertise and sensitivity - reveals hitherto hidden details of the interpretations, creating a sonic image of superior quality. CD releases produced from private recordings of radio broadcasts or old 78rpm records cannot match this level of sound quality.