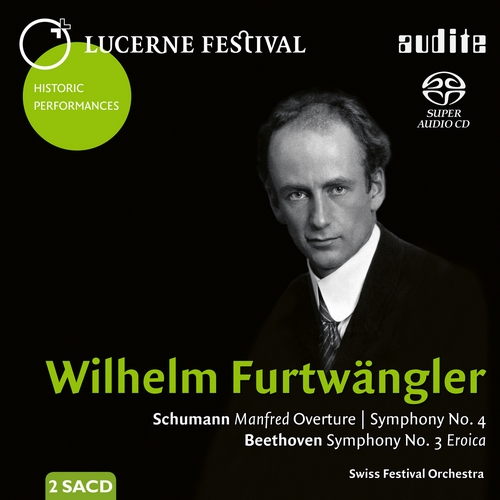 Schumann:
Symphony No. 4 in D Minor, Op. 120
Volume 12 of the LUCERNE FESTIVAL edition presents a sensational archive discovery: a live recording of the Manfred Overture from the 1953 festival, until recently presumed lost, and now released for the very first time. In 1953, Furtwängler also conducted two of his all-time favourites, Beethoven's Eroica and Schumann's Fourth Symphonies. Until now, these exciting interpretations were only available in technically flawed recordings made by enthusiasts. For this edition, the newly rediscovered original tapes from the archives of the SRF Swiss Radio and Television were made available.

It is the desire of many Furtwängler fans to experience the atmosphere and aura of the performances also in the recordings to a maximum extend. This goal serves the current SACD with two additional tracks: The atmosphere of Furtwängler's stage appearance and applause, followed by increasing silence of the audience at the beginning of the works create special ambience and the air of a live performance.

Wilhelm Furtwängler, invited to Lucerne for the first time in 1944, was one of the defining artists of the LUCERNE FESTIVAL's first decades. From 1947, he performed in Lucerne each summer (with the exception of 1952, when he had to cancel due to illness) until his final concert in August 1954, a few months before his death (recording also available in the "Historic Performances" series: audite 95.641). In total, Furtwängler conducted eighteen of the festival's concerts, sixteen of which with the Swiss Festival Orchestra who also played on 26 August 1953.
Live recording at LUCERNE FESTIVAL (Internationale Musikfestwochen Luzern), August 26, 1953, Kunsthaus, Lucerne