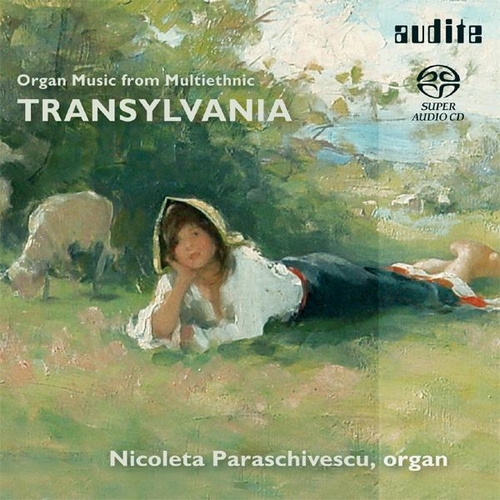 Sigismund Toduta:
Seven Chorale Preludes for Organ based on melodies of the Romanian ‘Colinde’ preceded by vocal introductions
Paul Richter:
Organ Sonata Op. 36 in D minor
Myriam Marbe:
Schäfers Pavane mit Vögeln II
'Colinde' (Romanian traditional Christmas Carols) are opening this recording. Irina Ungureanu presents them with her crystal clear soprano they are then being elaborated on in Sigismund Toduta's Seven Chorale Preludes. This composition - published here for the first time in its entirety - forms a bridge between the Lutheran and Orthodox traditions. Two works for solo organ complete this SACD: The Organ Sonata by Paul Richter is influenced by traditional romanticism. The big, orchestral sounds give the Sonata almost symphonic character at times. In the pastoral sound-painting Schäfers Pavane mit Vögeln II of the contemporary composer Myriam Lucia Marbe meditational passages are contrasted with surprising, concise motifs. The composer experiments with the most diverse colours of the organ in this piece. Transylvania, a melting pot of different people and cultures not far from the "Gate of the Orient", a region where Romanian, Hungarian, German, Slavic, Armenian and Jewish influences come together. This is where the compositions on this disc were written every work representing a piece in the musical mosaic of Transylvania. Nicoleta Paraschivescu studied at the Music Conservatory Gheorghe Dima in Romania, at the Schola Cantorum Basiliensis in Switzerland and at the Staatliche Hochschule für Musik und Darstellende Kunst in Stuttgart, Germany. She has given concerts at several renowned European music festivals. Apart from her concert engagements as a soloist, she also appears regularly with chamber music ensembles and orchestras. Nicoleta Paraschivescu is the titular organist on the Kern organ of the St. Theodor`s Church in Basel. Irina Ungureanu was also born in Romania. Singing lessons led her to Zürich where later on she studied at the Hochschule für Musik und Theater. In 2006, she was a finalist in the Nicati competition, the most prestigious Swiss interpretation competition of contemporary music. Irina Ungureanu is particularly interested in free interpretation, contemporary music, Romanian folk music, and the singing of Lieder and theatre music - that is to say the connection between text and music.