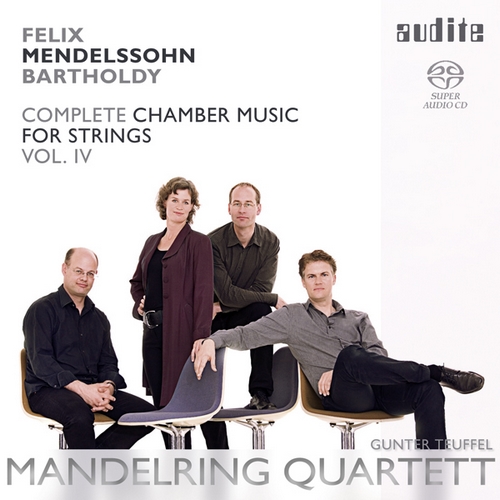 String Quintet No. 1 in A Major, Op. 18
String Quintet No. 2 in B-Flat Major, Op. 87
Four Pieces for String Quartet, Op. 81
This album brings to a close audite’s complete recording of Felix Mendelssohn’s Chamber Music for Strings with the Mandelring Quartett. Sitting alongside the better-known, substantial body of eight works for string quartet and the Octet Op. 20, Mendelssohn’s quintets for two violins, two violas and cello are often overlooked. This recording proves that this is mostly to do with the genre, and less so with the works themselves, both of which are significant compositions. The Quintet in A major Op. 18 was written in 1826, during Mendelssohn’s period of apprenticeship in Berlin – shortly after his family’s move to a grand mansion on the Leipziger Straße, which provided the atmosphere and a venue not only for Lea Mendelssohn’s famous salon, but also for musical performances. Felix Mendelssohn, who in his youth studied and even developed the works of the great composers, from Bach to Beethoven, was mostly guided by Mozart for his first quintet – in the charm of his melodic ideas, in the transparent sonorities of an ensemble with double violas, and in the contrapuntally concentrated network of themes and motifs. It would take nearly two decades for Mendelssohn to return to the string quintet genre – during a phase of rest and reflection that the busy conductor, general music director in Berlin and conservatoire director in Leipzig, had permitted himself at the spa of Bad Soden in the Taunus. The Quintet in B flat major that he composed here reflects his symphonic experience. The first violin opens the piece, soaring up with orchestral might over the trembling lower voices into a jubilant first theme – this atmosphere is maintained in the outer movements and, in the inner movements, contrasted with more intimate colours. The two single movements for string quartet from the posthumous collection of Four Pieces for String Quartet Op. 81 – the Capriccio of 1843 and a youthful Fugue – complete this recording series.