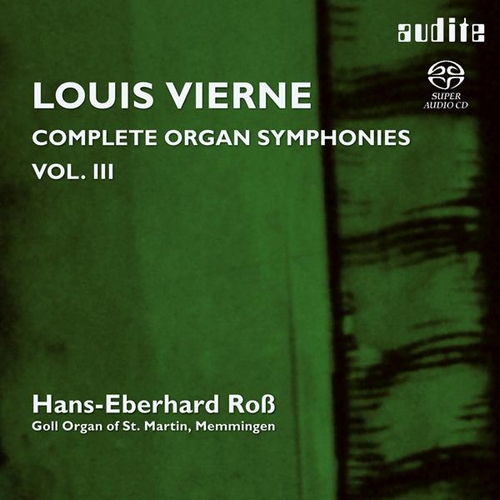 With the Fith and Sixth Organ Symphony, written in the years 1924 and 1930 respectively, the three-part complete audite recording of the six organ symphonies of Louis Vierne is completed. Both works were written when Vierne was permanently employed as organist of Notre-Dame in Paris and his life was headed towards international success - but was also being increasingly confronted with tragedy. Recorded at the Goll organ of St. Martin in Memmingen, the recording is characterised by the warm, soft and widely mensurated sound of the organ. Its sound creates unobtrusive power and fullness, making a symphonic effect in the church interior of St. Martin and yet always remaining clear. The polyphonic structures of the works become distinct and the transparency of sound permits fresher tempi than usual - both of which cannot normally be taken for granted with recordings of Vierne. Louis Victor Jules Vierne was highly gifted and ambitious, but nearly blind. His reaction to virtuosic organ playing, such as that of César Franck, was marked by bliss and suffering, joy and fear. He studied in Paris with Charles-Marie Widor, who had founded the genre of the organ symphony. At the age of 23, a future full of hope stood before him. That was in 1894 - when the French composer, organist and instrumental pedagogue Louis Victor Jules Vierne was able to deputise for his teacher in a dual capacity: at the organ console of the Parisian Church of Saint-Sulpice and in Widor's organ class at the Conservatory. But Vierne's calling was for higher endeavours: between 1899 and 1930 he composed six organ symphonies that were to bring the genre to a hitherto unknown peak of richness in timbres, mysticism and cyclical architectonics. Hans-Eberhard Roß is Director of Church Music in Memmingen. He has already made an internationally successful recording for audite of the complete organ works of César Franck. Additional information on the Goll organ and the registration you will find here.