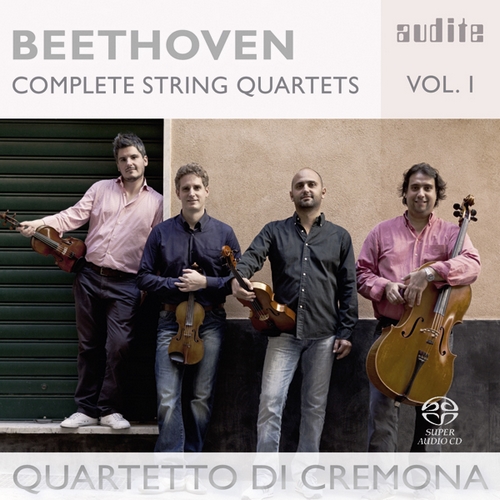 String Quartet in B flat major, Op. 18 No. 6
String Quartet in F minor, Op. 95
String Quartet in F major, Op. 135
?During the past ten years the Quartetto di Cremona has matured into a string quartet of international renown, combining the Italian culture of string playing with an awareness of historical performance practice. Having for many years performed at the great international halls, it is often regarded as the successor to the famous Quartetto Italiano. The musical style of the Quartetto di Cremona is marked by a fruitful tension between Italian and German-Austrian influences: Following their academic studies the players continued their training with Piero Farulli of the Quartetto Italiano. He strongly favoured intuitive playing and a fervent, emotional, romantic and "Italian" approach to music. Afterwards the musicians pursued their studies with Hatto Beyerle of the Alban Berg Quartet who represents a clear, classical, "German-Austrian" style, focusing on faithfulness to the original, form and structure as a basis for musical interpretation and inspiration. Both teachers have left a lasting impression on the quartet and significantly influenced its musical style. The players naturally unite both poles, combining boisterous enthusiasm with a distinct sense for musical architecture, cultivating the fusion of structure and expression, external shape and internal passion.

With the three works contained in Volume 1, the Quartetto di Cremona covers the most important periods of Beethoven's quartet oeuvre. The final of the six Op. 18 Quartets features a mysteriously programmatic dimension in its last movement, "La Malinconia", whereas Op. 95 from Beethoven's middle period is both highly compact yet dramatically gripping. The disc closes with Beethoven's final Quartet, Op. 135, completed in Vienna one year before his death: it differs from his less easily approachable late works in taking on a conciliatory stance.