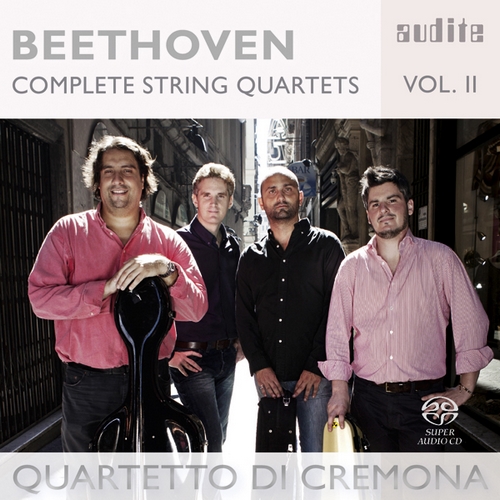 String Quartet in E minor, Op. 59 No. 2
String Quartet in E flat major, Op. 127
Following the successful release of Volume I in the complete edition of Beethoven String Quartets with the "Quartetto di Cremona", audite now continues the series. The choice of works for the second volume refers to two periods during which Beethoven turned away for good from the culture of music amateurs of the late eighteenth century. The Quartets Op. 59 of 1806, commissioned by Count Andrey Kirillovich Razumovsky, were written for Vienna's most famous professional string quartet, led by Ignaz Schuppanzigh. Beethoven's musical language is no longer balanced and well-seasoned, as that of his contemporaries, but is extreme in every respect: ruthless and with feeling, dramatically operatic and full of contrapuntal finesse.

The "Quartetto di Cremona" contrasts this work from Beethoven's mature phase with his opus 127 of 1824. It is this work in E flat major with which the already deaf Beethoven began his series of late works, received by his contemporaries with alarm, but by posterity with admiration.

For a long time after the dissolution of the "Quartetto Italiano" in the 1980s, no Italian string quartets seemed to come forward to seek international renown. The four young musicians from Genoa, however, who formed the "Quartetto di Cremona" following their studies in the violin making town of Cremona, have revived Italian string quartet playing. Since its foundation in 2000, the ensemble has developed into the best quartet of its country, and also into one of the most prestigious and imaginative quartets within Europe.

This status is documented by the audite recording series of the complete Beethoven String Quartets which was started one year ago - a touchstone for all string quartets in its textual dimension, as well as in its technical demands.