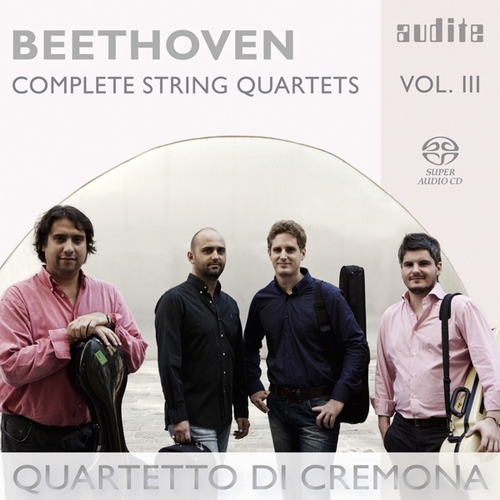 String Quartet in C Minor, Op. 18 No. 4
‘Great Fugue’ in B-Flat Major, Op. 133
String Quartet in F Major, Op. 59 No. 1
?"The reviewer dares not interpret the meaning of the fugal finale: to him it seemed unfathomable, like Chinese." Ludwig van Beethoven frequently aroused incomprehension amongst contemporaries with his late quartets. But no work seemed to his audience of 1826 as "Chinese" as the monumental movement that Beethoven had composed in the seemingly familiar form of the fugue. Ever since, the "Great Fugue" - originally the finale of the Quartet Op. 130 - has been surrounded by the nimbus of his extreme, almost impenetrable tenacity.

The Quartetto di Cremona have made the monumental Fugue Op. 133 the centrepiece of the third volume of their Complete Beethoven String Quartets recording series. The monolithic movement is flanked by two works from Beethoven's early and middle periods. The fourth Quartet of the first set, Op. 18, does not yet interpret the home key of C minor as fateful (as is the case later in the Fifth Symphony), but turns the quartet style of Beethoven's teacher Joseph Haydn towards the agitated. However, with the first Quartet of the revolutionary set of Op. 59, dedicated to the Russian Count Razumovsky, Beethoven looks far ahead into the future and composes a grandiose first movement, an expansive, sensitive Adagio and a finale in which he bows to his commissioner with a "Theme russe".