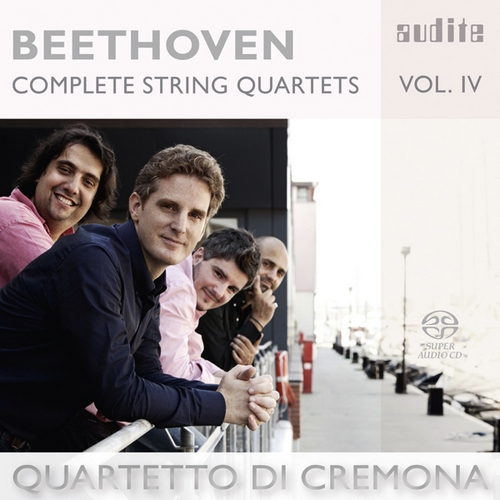 String Quartet in F Major, Op. 18, No. 1
String Quartet in C-Sharp Minor, Op. 131, No. 14
?For the fourth time, the Quartetto di Cremona embark on a journey of the almost impervious cosmos of Ludwig van Beethoven's String Quartets. This time, they have chosen two works forming a portal within the quartet writing of this composer who had made Vienna his home. Beethoven had opened his Op. 18 set with the Quartet in F major, written in 1798/99 at the behest of his patron and friend, Prince Lobkowicz. Despite the mellifluous, pastoral key, the music draws a long line from the brilliantly crafted first and last movements to the dark hues of the Adagio, apparently inspired by the tomb scene from Shakespeare's Romeo and Juliet. Even within the framework of the traditional form, Beethoven's quartet début achieves a maximum of moods and stylistic variety.

Beethoven's Quartet Op. 131 of 1826, generally perceived as a peak within his chamber music, is entirely different. It was written in the shadows of the Ninth Symphony and the Missa solemnis, but appears much more eccentric and "experimental" than these two large-scale works. Seven sections of diverse tone and character are played without breaks in between; a brooding fugue stands alongside a sensitive adagio, a folk tune presto is next to a restless finale. The work was written for the Viennese violinist Ignaz Schuppanzigh, whose quartet set the professional playing standard for the following hundred years. Schuppanzigh rehearsed Beethoven's Op. 131 painstakingly - without him this music, which was deemed not only unplayable but also "unhearable" by contemporaries, would not exist.