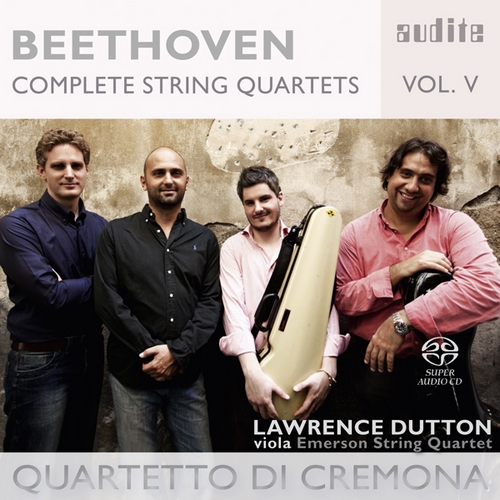 Wolfgang Amadeus Mozart left six string quintets to the music world, Louis Spohr's work catalogue contains seven, whilst Luigi Boccherini completed around 120. Ludwig van Beethoven had three quintets published; however, only one of these was originally conceived for string quintet - the upset over the different editions was clearly so serious that the Viennese maestro felt no desire to write any more "real" quintets. However, his opus 29 of 1801 is a true masterwork on the brink between the Classical style of his teacher, Joseph Haydn, and the revolutionary idiom of Beethoven's middle and late periods. The Adagio (with its adjunct of "molto espressivo") in particular heralds an evocative intensity which was still foreign in Beethoven's earlier works.

However, for his late oeuvre of the 1820s - the Ninth Symphony, Missa solemnis, late piano sonatas and string quartets - Beethoven had developed such a distinctive language that the label of "Early Romanticism" no longer applies. His String Quartet in A minor, Op. 132, with its five movements and exceptional degree of difficulty also stands apart from contemporary works; then and now, only professional ensembles could tackle this grandly conceived colossus. As in the quintet, the Molto adagio represents the core of the piece. Its title - "Holy song of thanksgiving of a convalescent to the Deity" - refers to an illness from which the composer had recovered, and adapts a chant inspired by the Renaissance composer Palestrina. In so doing, Beethoven includes a musical ancestor in his quartet whilst making a religious avowal.