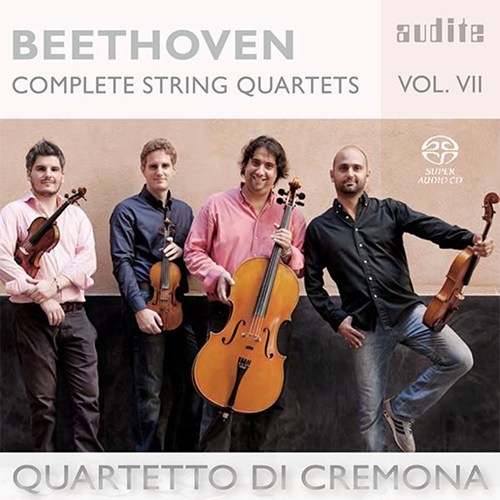 String Quartet in C major, Op. 59, No. 3:
Introduzione. Andante con moto – Allegro vivace
Andante con moto quasi Allegretto
Menuetto. Grazioso – Trio – Coda
Allegro molto
The Quartetto di Cremona have completed another stage in their adventurous journey through the cosmos of Beethoven’s String Quartets, visiting the Quartet in G major from the Op. 18 set and the last of the Op. 59 Quartets. The performance culture and market for the string quartet in the late eighteenth century was markedly different to that of later times: the young Beethoven wrote his Quartets Op. 18 for amateurs. The G major Quartet, the second in the collection, was one such work that could be mastered by talented aristocrats and bourgeois connoisseurs – which is not to say that its complexities or musical challenges are in any way diminished. With the so-called “Razumovsky” Quartets, the string quartet reached adulthood. And one only needs to compare the technical and intellectual demands of Op. 59 to contemporary works (such as the quartets of the young Franz Schubert) in order to recognise that Beethoven no longer composed for able amateurs, but for highly professional specialists. This becomes particularly obvious in the finale, an extended and extremely virtuosic fugue. The Quartetto di Cremona have combined these two works from Beethoven’s early and middle periods for the seventh volume in their Complete Beethoven String Quartets recording series. Both works end with an “earworm” – one in the classical spirit and one in the form of a rapid fugue – finale furioso!
Recorded November 27 - 30, 2015 in ‘Fondazione Spinola Banna per l’Arte’, Poirino