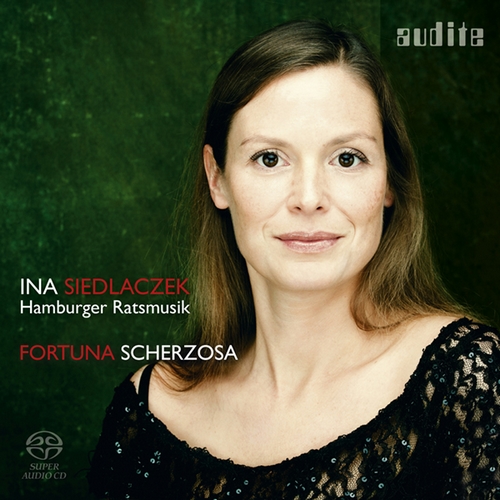 PHILIPP HEINRICH ERLEBACH:
Des Glückes Spiele
Geduld kann überwinden, will sich das Unglück finden
Mein Sehnen ist gestillt, und mein Wunsch nun erfüllt
JOHANN ULICH:
Ihr hellen Sterne des Glücks
GEORG PHILIPP TELEMANN:
Fortuna scherzosa
Amor heißt mich freudig lachen
Hoffnung
JOHANN PHILIPP KRIEGER:
An die Einsamkeit
Fortuna scherzosa, after Telemann's eponymous cantata, provides the textual framework for the works recorded here: the subject matter is hope, yearning for fortune, fulfilment and non-fulfilment, happiness and suffering. With her pure, straight and flexible voice, Ina Siedlaczek expresses these diverse emotions with great authenticity. Her music-making is historically informed, free and relaxed. Her interpretations are natural and, in the most positive sense, simple.Not only the texts of many Baroque cantatas and arias speak of Fortuna's fickleness. A glance at music history also reveals how unequally sympathy and success were distributed: many composers who were great names during their own lifetimes later faded into obscurity not because their works lacked quality, but due to coincidences, or because they were eclipsed by the fame of their successors.One of these composers was Philipp Heinrich Erlebach. His oeuvre comprised hundreds of works in nearly all genres current at the time. During a fire, however, the great majority of his music was lost: only around seventy of Erlebach's works are known today. The occasion of the tercentenary of his death on 17 April 2014 will hopefully make them more famous once again.Johann Ulich was released from complete oblivion only recently when some of his manuscripts were rediscovered. Ulich had been Kapellmeister at the court of Zerbst between 1708 and 1742, and would therefore have been an accomplished musical director and a versatile composer. It is thought that the majority of his oeuvre was lost when the princes' palace of Anhalt-Zerbst was destroyed during the Second World War.Georg Philipp Telemann, however, won fame during his lifetime and remains one of the most famous composers of the Baroque era. But his cantata Fortuna scherzosa did not come to light until 1999 when the historic music archive of the Berlin Sing-Akademie was rediscovered in Kiev (Ukraine), which included sixteen works by Telemann that had, until then, been unknown.At the age of around twenty-three, Johann Philipp Krieger already was Kapellmeister to a margrave he enjoyed forty-five years of employment as a widely-known and famous Kapellmeister at the art-loving court at Saxe-Weißenfels, leaving behind a legacy of around 2500 compositions. Nonetheless, he is largely forgotten today as only a fraction of his compositions has survived.Ina Siedlaczek's interpretations are deeply moving, not least thanks to an audible match between her personal philosophy and the over-riding message of this SACD. She received a wide-ranging musical education from an early age, learning the violin, viola, piano and organ. In addition to her singing studies, where her teachers included Heidrun Luchterhandt (Heidelberg) and Prof. Vera Scherr (Mannheim), she completed a music therapy course with a diploma in Heidelberg.As a soloist, Ina Siedlaczek is in great demand both as an oratorio singer and as a consort singer. Alongside the classical oratorio repertoire, one of her particular interests is historically informed interpretation of vocal music of the era before Johann Sebastian Bach. She regularly assembles programmes of this repertoire, including solo cantatas. She works closely with ensembles who have also specialised in this period. Ina Siedlaczek is regularly invited by renowned music festivals and undertakes concert tours across Europe. Numerous CD and radio recordings document her creative work.