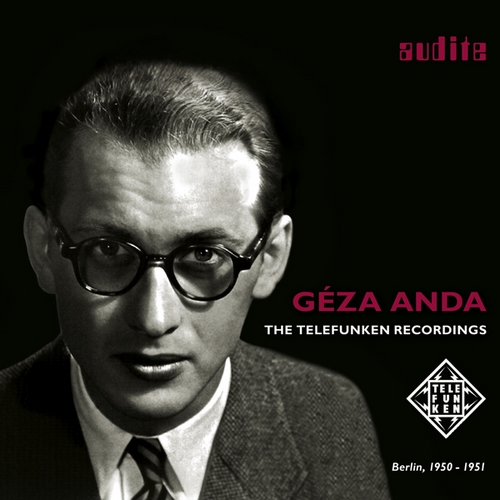 Mozart :
Piano Sonata in D Major, K. 576
These recordings are characterised by Géza Anda's distinctive balance of spontaneity and intellectual control, incisive poetry and brilliant technique. Géza Anda bestows upon his audience not only a pianistic and musical moment of glory, but also invites them to witness the birth of a pianistic aestheticism where objectivity and fantasy are no contradiction but are dependent on each other.

Following its "Edition Géza Anda", audite now issues - for the first time on CD - Géza Anda's Telefunken recordings made in 1950 and 1951. This fifth audite release featuring the Swiss-Hungarian pianist closes a gap which has long been a source of regret to connoisseurs and admirers of Géza Anda's pianism. Chronologically, the Telefunken recordings are positioned between Anda's first recordings for Deutsche Grammophon and the later recordings for Columbia and DG. They document the pianist's transition from brilliant virtuoso to sophisticated musician. The objectivity of his Bach, Haydn and Mozart interpretations and the painstakingly worked out, fantastic world of the Schumann cycles complement each other in characteristic and fascinating fashion.

Comprising Robert Schumann's Carnaval Op. 9 and his Symphonic Etudes Op. 13, the Telefunken recordings represent two important pillars of Anda's repertoire. However, they also contain three works which he played only rarely: Johann Sebastian Bach's Partita No. 2 in C minor, BWV 826, Joseph Haydn's Sonata in F major, Hob. XVI/23, and Wolfgang Amadeus Mozart's last Piano Sonata in D major, K. 576. The recording of the Mozart sonata is a particular rarity and treasure as it is the only recording of Anda, the great Mozart interpreter, documenting a performance of a Mozart work for solo piano.