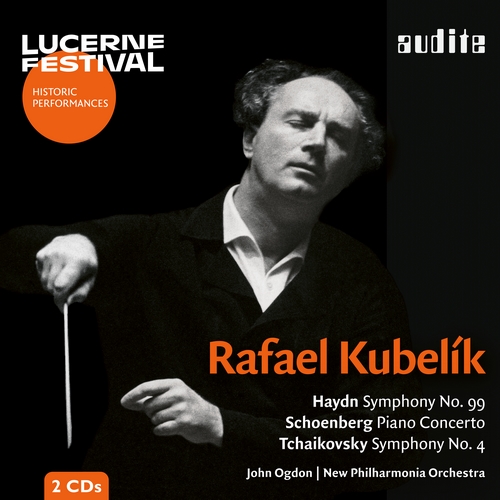 CD 2:
Pyotr Ilyich Tchaikovsky:
Symphony No. 4 in F Minor, Op. 36
In the summer of 1968, a few days after the brutal suppression of the “Prague Spring”, the Czech émigré Rafael Kubelík conducted a gripping concert in his adopted home city of Lucerne: a Haydn Symphony, full of joie de vivre, and a passionately glowing account of Tchaikovsky’s Fourth Symphony frame Schoenberg’s Piano Concerto, played by the British piano legend John Ogdon in his only appearance at Lucerne Festival.

“Kubelík championed the Tchaikovsky symphony as if it were a declaration of the victory of the spirit, of freedom over all the forces of fate”, commented a critic following the closing concert of the Lucerne Summer Festival in 1968. The historical parallels of the current situation with the Russian war of aggression in Ukraine are unmistakable: a few days before Rafael Kubelík’s performance, the socialist reform movement in Prague was brutally crushed by the tanks of the Warsaw Pact. Kubelík, a Czech émigré who had adopted Lucerne as his new home, not only pleaded for a severance of artistic relations – an appeal which was supported by musicians such as Arthur Rubinstein, Yehudi Menuhin and Igor Stravinsky – but he also asked Lucerne concertgoers to support his “Foundation for Czechoslovak Émigrés after 21 August 1968”. However, Kubelík stuck to the programme as originally planned, even though this caused controversy and was discussed in the newspapers: his dramatically pointed reading of Tchaikovsky’s Fourth Symphony with strikingly abrupt changes in tempo and tone, heightening the orchestral virtuosity in the finale, is captivating and created a furore.

All three live recordings on this disc are first releases. The 32-page booklet in three languages provides a portrait of the conductor written by Wolfgang Stähr and also features photos from the festival archive, published here for the first time.
Live recording at Lucerne Festival (Internationale Musikfestwochen Luzern), Kunsthaus, Lucerne, September 8, 1968.