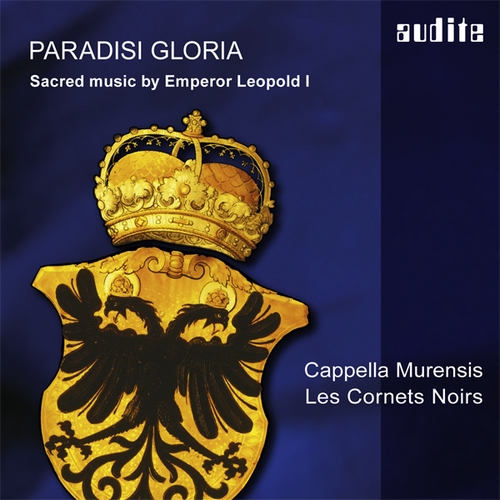 I Kaiser: Paradisi Gloria - Sacred music by Emperor Leopold I

Stabat Mater W 47
Motetto de Septem Doloribus Beatae Mariae Virginis "Vertatur in luctum cythara nostra" W 40
Missa pro Defunctis W 11
Tres Lectiones I. Nocturni pro Defunctis Piae Claudiae Felici lugens maestusque Leopoldus posuit et musicis legibus distinxit W 33
The Habsburg Emperor Leopold I (1640-1705) made the residential city of Vienna into a first-rate cultural centre during the period of his reign. He was himself a gifted and productive composer. His musical talent was encouraged early on, so that he was recognised as a musician and composer far exceeding the status of a mere dilettante. His works are still regularly performed at concerts at Muri Monastery Church: The ancestors of the House of Habsburg founded Muri Monastery and the Benedictine Abbey remains affiliated with the House of Habsburg until today.

This recording features leading baroque singers performing selected works of Leopold I together with the Cappella Murensis and the Ensemble Les Cornets Noirs under the direction of Johannes Strobl. Two of the compositions have a personal context.

Leopold composed a Requiem Mass following the death of his first wife, and he set readings and responsories after the death of his second wife. Both funereal compositions are amongst the Emperor's strongest works: in them, he is able to represent personal feelings with musical means in an emotionally moving way. The colours of the instrumental ensemble enrich the vocal writing, which is as convincing in its well-thought-out sequence of soloistic sections and choral passages as it is in the beauty of its melodic ideas and harmonic simplicity.