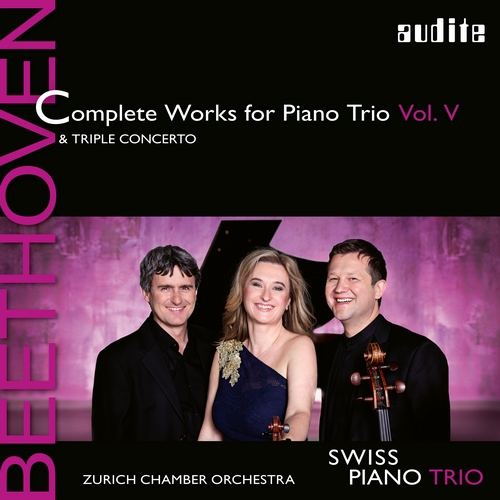 Variations in G major, Op. 121a on ‘Ich bin der Schneider Kakadu’
Piano Trio in E-flat major, WoO 38
Allegretto in B-flat major, WoO 39
Concerto in C major, Op. 56 ‘Triple Concerto’
The complete edition of Beethoven’s works for piano trio is rounded out with this release of the fifth volume, also the high point of the series: the Triple Concerto, recorded here with the Zurich Chamber Orchestra, is not a chamber music work, but a concerto for piano trio and orchestra that posed special challenges to the composer due to the presence of three soloists. The work’s originality lies in the art of balancing the detail of chamber music with orchestral “al fresco.” The concerto can be discovered alongside the skillfully-written Kakadu Variations, op. 121a, with their folk-like character, a work probably composed in 1809.

The Piano Trio WoO 38 was composed in 1790/91 and is thus dating from Beethoven’s Bonn period – an early stage of his chamber music compositions. During his lifetime the work remained unpublished.