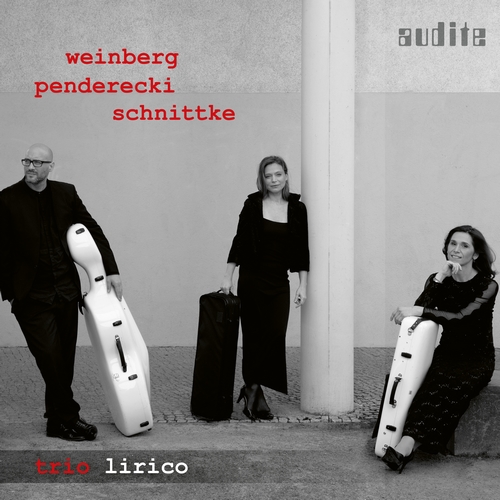 Alfred Schnittke:
String Trio
The Trio Lirico has programmed three composers who lived and worked on the Eastern side of the Iron Curtain until 1989: for Franziska Pietsch and Sophia Reuter this is music which – paraphrasing Goethe – they “search with their souls”. “As children, we both lived in East Berlin and were close friends already”, Franziska Pietsch explains about her violist colleague. “We therefore share personal history, a similar style of playing and a similar non-verbal way of communicating about this music. We just feel it.”

This personal form of perception, into which the Bremen cellist Johannes Krebs blends empathetically, is not irrelevant for this music which becomes accessible not just via the text but also to a high degree via the cultural and political environment in which it was written. Of course Krzysztof Penderecki (b.1933), following the political liberalisation of Polish music from 1956, had the opportunity to tie in with avant-garde developments in the West and to create his very own and unique modernism. On the other hand, his generational colleague Alfred Schnittke (1934-1998) and the older Mieczysław Weinberg (1919-1996) had, until the end of the Soviet Union, to assert their music in the face of massive harassment from the authorities which, in Weinberg’s case, went as far as being arrested for anti-Semitic reasons.

Born in Warsaw, Weinberg, who fled to the Soviet Union during the Second World War, kept in close contact with his friend and mentor Dmitri Shostakovich. Nonetheless, Weinberg’s music is entirely unique, and his string trio of 1950 strikes a balance between popular tunes and references to Yiddish music. Alfred Schnittke, who found it hard gaining acceptance on account of his (Volga) German and Jewish heritage, composed his trio in 1985 for the birthday of his illustrious colleague Alban Berg – and, shortly after completing the work, suffered a life-threatening stroke, retrospectively lending this work a tragic note. The most recent work recorded here is by Poland’s most eminent living composer, Krzysztof Penderecki: in 1991 he wrote his string trio as a great improvisation for three performers with a strict and wild fugue.
Recording: November 5 - 7, 2018, Jesus-Christus-Kirche, Berlin-Dahlem. Franziska Pietsch plays a violin by Carlo Antonio Testore (Milan) of 1751. Johannes Krebs plays a cello by Carlo Antonio Testore (Milan) of 1746.