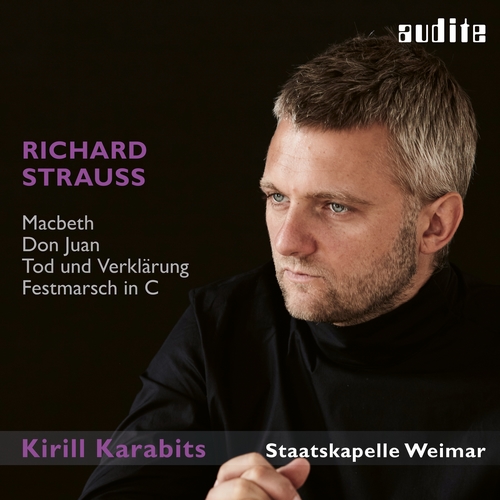 Weimar was not only the metropolis of the classical era that acquired world fame thanks to Goethe and Schiller. Weimar was also the domain of great musicians: Franz Liszt served as Kapellmeister in the city and invented the genre of the symphonic poem. Richard Strauss followed in his footsteps when he, as Kapellmeister from 1889 until 1894, presented his own first symphonic poems, “Macbeth” and “Don Juan”, at the helm of the Weimar court orchestra. Kirill Karabits, Generalmusikdirektor of the Deutsches Nationaltheater since 2016, now presents, alongside today’s Weimar Staatskapelle, not only these two major works of his great predecessor, but also “Tod und Verklärung” (Death and Transfiguration), which Strauss had completed in Weimar. The contemporaneous Festmarsch in C major, TrV157 – Strauss’ anniversary gift to “Die Wilde Gung’l”, the Munich orchestra he had conducted in his youth – is a true rarity, rounding off this recording.

Next month, audite will be presenting “Don Juan” with Ferenc Fricsay and the RIAS Symphony Orchestra in what promises to provide an intriguing historical comparison.
Recording: December 19 - 21, 2017, Weimarhalle, Weimar